The first mens team from UFC Utrecht have won the Dutch Floorball Championship for the 5th time in a row. With full stands in the Nieuw Welgelegen sports hall UFC Utrecht won the finals defeating FB Agents from Amsterdam with 11-6.

UFC Utrecht have played a flawless season with zero losses and started the final as favorites. Although they have had the odds on their side, it would not be an easy match. Due to injuries UFC Utrecht had to play without two driving factors Nikki Jansen and Jouk Hogenhuis.

In the first two periodes the teams were evenly matched. The first period was already an eventful period resulting in a 4-3 score for UFC Utrecht. Because of several 2-minute penalties in the second period from FB Agents, UFC Utrecht was able to secure a 6-4 lead at the end of the second period. In the third period FB Agents were forced to take more risks trying to equalize. This gave UFC Utrecht more space to out play them. Eventually UFC Utrecht capitalized on this advantage and secured their 5th championship title.

The success of UFC Utrecht is mainly because the team have been playing together for many years. “Most of the players have started in the UFC Utrecht youth teams and others I’ve played with in the National team. Our success comes from the fact that we know exactly what we can expect from each other, on and off the field.” As said by team captain Gijs Dieleman. 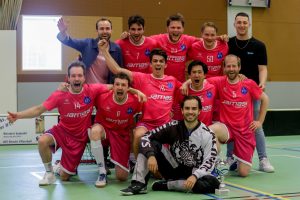 On the same day UA Sonics from Amersfoort played against Hot Flames from Nijmegen. With their supporters cheering them on, the game started off level headed. Although UA Sonics had the faster and stronger offense, Hot Flames managed to keep a solid defense. Eventually UA Sonics had the longest breath and took the win with a blasting 8-0 score.

The first period was evenly matched and resulted in 0-0. After the second period the game pretty much looked the same. UA Sonics was on the offensive, while Hot Flames was having a great defense. Although the offensive barrage of UA Sonics was continuously pressuring the Hot Flames defense, UA Sonics had to be carefull not to give away the ball too easily. Hot Flames had several counters that would have changed the game’s momentum.

Eventually after 13 minutes and 23 seconds in the second period Ilse Stoffers made the first goal of the match after a great move towards the goal besting one of the best goalies in the Womens league Hester Hendrix. Up untill this moment the 14 shots that UA Sonics had were all stopped by Hendrix. Ilse Stoffers who has come up through the ranks of UA Sonics their own youth program, has been very important for UA Sonics. Her speed and technical abilities have brought UA Sonics to the finals and now closer to becoming Dutch Floorball Champions.

The third period the game was broken open. With the 1-0 lead, UA Sonics kept going on the offensive and Hot Flames had to try to find a way to be on the offensive too. With Hot Flames trying to pressure the UA Sonics and trying to control the game more, they also gave up more space. UA Sonics was able to build their lead up to 3-0, which resulted in Hot Flames pulling their goalie in the last 7 minutes of the game. Unfortunately the 6-man powerplay did not work out well and UA Sonics managed to score a couple of empty net goals securing their championship!

On the 4th of june both UA Sonics and UFC Utrecht have made it a perfect season by also winning the Cup finals. But the big reward has already been secured for both teams, which is a ticket to the Euro Floorball Challenge.