This is Floorball video is edited by Janne Makkonen, Moskito Sport.

1986
The International Floorball Federation was founded 12th of April in Huskvarna, Sweden, by the Floorball associations of Finland, Sweden and Switzerland.

1992
The first official IFF Congress was held in Zurich, Switzerland and the first rulebook was approved.

2001
The first Men’s U19 World Floorball Championships was played in Germany.

2005
The Asia Oceania Floorball Confederation (AOFC) was established in Singapore.

2008
IFF received provisional IOC recognition on the 11th of December.

2017
Floorball as an official sport in the World Games (Wroclaw, Poland) and in the Special Olympics World Winter Games (Austria) for the first time.

2019
The Women’s WFC 2019 generated record media interest in Switzerland and a new total attendance record for Women’s World Floorball Championships was set with 44,513.

The year 2020 will be remembered as a very different floorball year full of new and unexpected challenges. Most of the planned IFF Events were either cancelled or postponed as the Covid-19 made it impossible to organise international events. Despite the challenges, there has still also been some positive development efforts and changes taking place within the international floorball world and here we mention a few.

The second IFF Kids with Sticks is an IFF Development Project which took place in April-May 2020 with the main objective to provide children the joy and benefit of sports and to develop floorball at the same time. A total of 55 organisations applied for the Kids with Sticks equipment support and 16 projects were selected to receive the UNIHOC equipment support package. Unfortunately Covid-19 is still effecting the possibility to ship equipment to all parts of the world, but the IFF will make sure that all elected projects will receive the promised support packages. Read more here.

The IFF launched its first ever World Virtual Freestyle Floorball Cup (WVFFC) in 2020. In the WVFFC competition every floorballer could take part by showing their best tricks or skills within a certain time-limit. The competition was organised virtually and the winners were crowned based on social media voting. A total of 70 participants from 27 different countries for the first ever WVFFC. Agnes Holgersson from Sweden won the U16 category with 3217 combined Facebook and Instagram likes and Sangeeta Rathi from India won the Adult category with 5255 combined likes. The top 10 contestants got around 37,5 combined likes on Instagram & FB during the competition. Read more about the WVFFC here.

The IOC DOW Carbon Action Award winners were announced on the 6th of November during the IF Forum IOC Sustainability Workshop 2020. This year a total of 20 organisations were recognised through this award the IFF being one of them. Read more here.

A total of 48 IFF Member Associations attended the first ever virtual IFF General Assembly (GA) on the 11th of December and approved the IFF Strategy  for 2021-2032 – Strengthening the Foundations. The Strategy sets direction and development of floorball worldwide during the twelve coming years. Read the IFF Strategy, PDF version & issuu version. 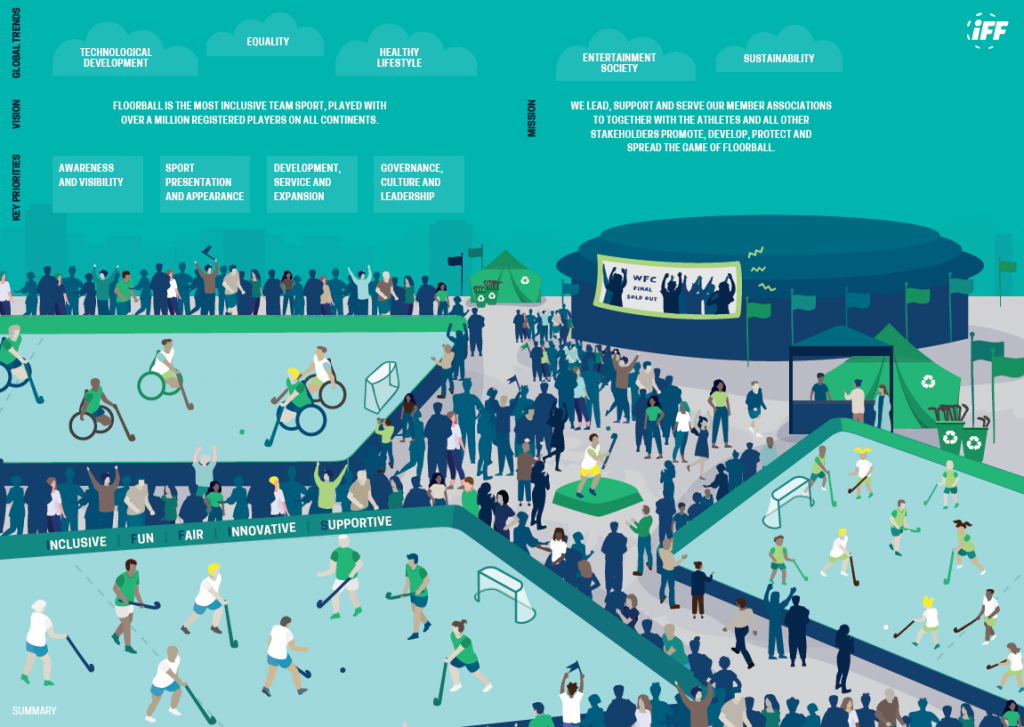 Happy 6th International Floorball Day! We look forward to meeting you all soon at the IFF Events!