Singapore and Australia qualify for the Men's U19 WFC 2023!

The Men’s U19 WFC 2023 AOFC Qualification event came to an end with Australia taking the 9-2 win over hosts New Zealand. This result sent Australia through to join Singapore as the two AOFC teams to qualify for the Men’s U19 World Floorball Championships 2023 in Frederikshavn, Denmark from 26th – 30th April 2023!

International floorball returned to New Zealand after a 4 year wait due to the pandemic. Wellington had also previously hosted the Men’s U19 WFC 2019 AOFC qualification event in 2018 where all 3 matches between the hosts, Japan and Australia ended in draws! This time around both Singapore and Australia finished on 3 points in the group with a win and a draw each to qualify, whilst New Zealand who battled hard and had the lead in both of their matches, fell to 2 losses.

Heavy rain outside couldn’t dampen the excitement for the first night of competition in the U19 Men’s AOFC Qualification in Wellington, New Zealand. A goal from Singapore within 15 seconds set the scene for a fast physical first period. Another Singapore goal early in the second period led to more of the same frenetic pace and action for both goal keepers. Australia’s perseverance paid off in the third period with three goals in five minutes to take the lead. Singapore rallied and drew level with two minutes to go. Australia survived the last two minutes down a player to hold out for a draw. It finished 3-3.

Excitement on the second night of competition as New Zealand scored within the first two minutes to the delight of the home crowd. Slick possession and clever screening brought Singapore even a few minutes later. New Zealand broke through for two fast goals but Singapore were quick to respond and pull one back. New Zealand scored for a fourth early in the second period, but couldn’t keep Singapore out for long as they upped the pace for four goals to move ahead. A successful penalty shot in the first few seconds of the third period allowed Singapore to pull further ahead. New Zealand were unable to make anything from three power plays or their own penalty chance. Singapore put it beyond doubt with two minutes to go. It finished New Zealand 4 – Singapore 8, sending Singapore to Denmark.

Both teams were raring to go for the final must win day of the qualifiers. It was a a nervy start with an early goal for Australia disallowed. End to end play led to New Zealand scoring from a power play in five minutes. The Australians were quick to respond and then drew ahead towards the end of the first period. Australia bagged two in quick succession early in the second period. Strong defending by the Australians meant New Zealand failed to capitalise on two stints with two extra players and breakaways led to Australia’s fifth and sixth goals. Australia extended their lead early in the third period with two further goals. Australian keeper Doyle proved strong in net and it wasn’t until he came off that the boys in black and white were able to pull one back. Australia retaliated swiftly. It finished Australia 9 – New Zealand 2 to see Australia claim the second qualification spot. 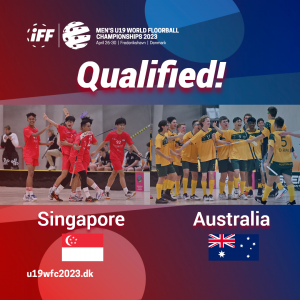 Full match replays and highlights from each game can be found on our YouTube channel.