Saturday was the day of the semi-finals and placing games at the Women’s U19 WFC 2022 in Katowice, Poland.

Team Norway in a rush and scoring first two goals in the first 90 seconds. Hungary was not able to recover from this. Norway themselves kept powering the entire game and scored 19 goals in the end. Hungary was only able to find the back of the net three times. Norway wins 19-3.

Australia with the better start and with the better end! The first period was already packed with plenty of spectacel and ended with a two all draw. After both intermissions it was Australia which was able to score first and hence brought the lead over the time. Australia is placed 15th with a 5-3 victory.

An absolute thriller of a semi-final. After the first period both teams went to the dressing room with a draw (1-1). Just after the restart Switzerland was able to lead for the first time in this game. It did not take Team Czech Republic too long to answer with two goals and their second lead in this game. It was Switzerland which was able to score two goal in a row and securing their second lead in this game. But it was Anna Bruchackova who scored the equaliser with her second goal of the macth, just three minutes before the end. There was also no game winning goal in the extra time. So it was the penalty shoot out which had to decide about the winner. It was Team Czech Republic with the better end and playing for gold. 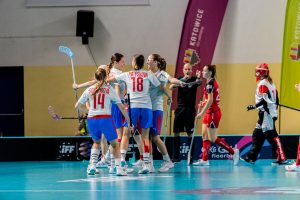 Team Austria was able to open the scoreboard in their favour. But it was their only goal over the whole 60 minutes. But Daria Leu and Elena Leu had different plans and scored three goals between them. Italy was able to secure 13th place with this 5-1 win.

Team Sweden had clearly the better start and was able to lead by three goals after 14 minutes. After Finland scored their first goal – Sweden’s reaction was strongly and scored another 3 unaswered goals. Finland tried various solution but it was Team Sweden which clearly kept the upper hand. They kept adding goal after goal and go into the gold medal watch against Czech Republiy by winning 8-3. 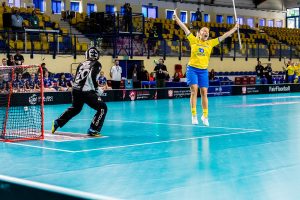 Team New Zealand was able to lead two times until half way of this intense match. But the answer from Denmark was resolute and scored two goals themselves to lead the game 3-2 after 49 minutes. Now it was up to New Zealand to make a statement and they did – two goals within two minutes- to take the lead another time. But guess which team scored the next two goals – it was Denmark! So they won 5-4 and finish on the 11th place.

The game was not even eight minutes into the first period while Latvia was already leading 3-0. Samanta Berzina did not score but she was three times the successful player who gave the last pass to the scorer. With three assist she scored most point in this game. Germany continued to struggle the back of the net and in four games only scored one single goal. Latvia wins 4-0.