Thursday was the second day at the Women’s U19 WFC 2022 in Katowice, Poland.

What a game early in the morning. It was Slovakia which led the game comfortably with 3-0 after the first period. But Norway kept their spirits high and scored 24 seconds into the second period and they did not stop scoring until they led 5-3; all this happended within 13 minutes in that second period. Team Slovakia had an answer and scored themselves another two goals which brought the first draw in this tournament: 5-5.

Hungary had the better start into this game and was able to score the first goals. But Canada had plenty of energy left in their tanks and was able to score five goals over the whole 60 minutes. But it was very difficult task to bring this game home as team Hungary was on fire and scored a total of 13 goals. Once more it was Nora Lelovics who was involved in more than 50% of all Hungarian goals.

Team Czech Republic had definitely the more successful start into this clash between the two red hot favourites from group B. They were enjoying the tea in the first intermission with a 2-0 lead. But Sweden had a strong answer in the second period and scored four unanswered goals. Three and a half minute before the end Czech Republic was able to score their thrid and last goal. Sweden winning by one goal; 4-3. 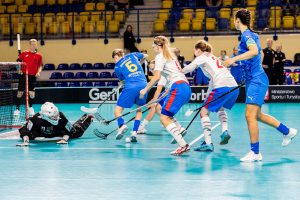 It is still not daily business that a non-european team is winning over a team from Europe. New Zealand achieved this success with a very strong second period where they were able to score three times. In that period Italy did not find the back of the net. In the other two periods both teams scored the same amount of goals. New Zealand takes the win 6-3.

Team Latvia with a quick start into this game and an early goal. Latvia did not stop scoring throughout the whole game with plenty of different goal scorers. The good news for Austria is that they were able to scor their first two goals of the tournament. In the end Latvia was too strong and wins 14-2-

After the first period this game looked like any possible game if two of the top favourites are meeting in the group games. Finland was leading by two goals. But Switzerland showed a high effciency in converting their powerplays and scored two goals in the first five minutes of the second period. Switzerland kept shocking Finland and scored another seven goals which led to a clear victory 9-2.

Australia scored the first goal and was able to maintain the lead until 32 minuted were played. It was the time in which Denmark scored three quick goals within thre minutes.  Australia managed to shorten the lead from Denmark to one goal; but Denmark managed to bring the 6-2 lead and win over the playing time.

This is the first victory for the host nation. Poland was more successful from the start with the victorious onversion of a penalty shot. Poland consistently increased their goal scoring. For the last minutes Team Germany tried everything and swapped the goalkeeper for a sixth field player – but it still was Poland who was able to score. Poland 7, Germany 1.