With less than 60 days to go to the first Floorball match being played at The World Games 2022, we will be looking at the next team in our countdown that will take part this July in Birmingham, Alabama; Canada!

Canada have not participated at The World Games before, making Birmingham 2022 a huge achievement and competition for them. Their path to The World Games was undertaken at the 2020 Men’s WFC in Helsinki. They got to open the tournament as the first match against Singapore, winning a back and forth affair 9-8. Canada’s second match was against the strong side of Estonia with whom they lost 21-4. Their final group match against the Philippines was to decide who would go through to the playoff stage. Canada won the match 13-8 again showing a strong attack with many goals and chances throughout the game. By making the playoffs, Canada had achieved qualification to the World Games as the USA had fail to qualify for the play off stages from their group. Their playoff match against a strong 5th ranked Latvia ended in a 16-3 defeat. This set up Canada for placement matches in which they first lost to Germany 15-7 in a crazy scoring game before coming up against Poland for 11th. The match was an extremely tight affair going back and forth with the teams still tied up after regular and overtime. A shootout was to decide things in which the Poles prevailed, with a strong showing by the Polish goalkeeper in the shootout. A disappointing end for the Canadians but a tournament they could be proud on and look back on as the strongest team outside of Europe in the tournament. 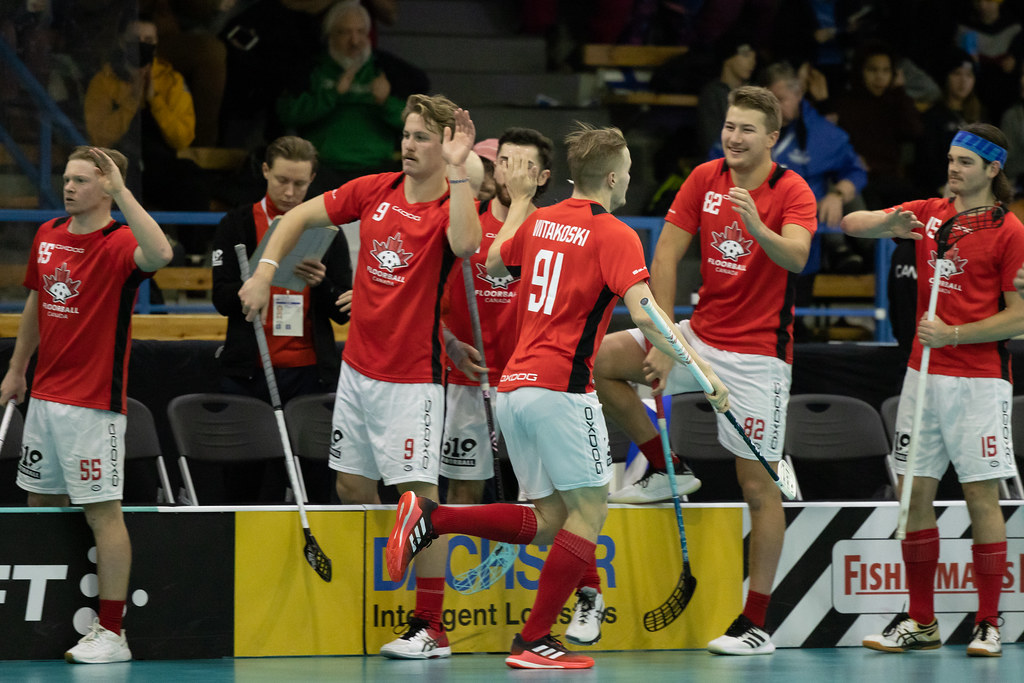 With The World Games being hosted in Alabama, USA, Canada will be looking for some increased support from the travelling and local Canadian fans to help push them to their best showing in their first World Games. With Floorball expanding from 6 to 8 teams at this years World Games, Canada will be aiming to be the best placed team from outside of Europe with a strong lineup of European nations competing, or even make a possible upset and push for the semi finals.

The Floorball League of Canada (where a large majority of the national team players take part in) has been severely impacted since the start of the pandemic and hasn’t seen any games played since the 2019/20 season. This has hampered the development of a large portion of the national team. Some players have moved or are based in Europe playing in some of the top leagues. One of these is Valtteri Viitakoski, born in Ontario, Canada and now playing for Nokian KrP in the Finnish F Liiga. As Nokian were in the playoff final in Finland ,Valtteri could not make it across for the Men’s WFCQ 2022 AMER Qualification event in Fort Worth, Texas that took place in April, but is a major part of this Canadian team and will be looking to show his best abilities in Alabama for The World Games. Watch the interview by Adam Troy with Valtteri Viitakoski, as part of our series of interviews on the road to the World Games, to hear more about his background and hopes for the upcoming World Games tournament.

Canada recently competed at the Men’s WFCQ 2022 AMER Qualification event in Fort Worth, Texas, USA for the chance to qualify for the World Championships in November 2022. Canada managed to win game 1 and tie game 2 therefore securing their qualification to the World Championships this November in Switzerland. Game 1 was a 4-1 victory followed by a 4-4 tie in Game 2 meaning a 8-5 victory on aggregate.

How well will Canada do at the World Games in Alabama? Only time will tell, but they will for sure be boosted by a some strong, skilled individuals, great team chemistry and the confidence from their recent victory over the USA.

The previous edition of The World Games in 2017 in Wrocław, was won by Sweden, beating Switzerland in the final, 7-5. Finland came 3rd followed by Czech Republic in 4th, USA in 5th and hosts Poland in 6th.