The season in Finland has started well for the reigning Finnish and CC champions. Classic is leading the Finnish league at the moment.

#20 Nico Salo
The team captain and Finnish national team captain. One of the best players in the whole world.

#45 Jere Pulkkinen
One of team Classic’s young defender talents. Not the biggest but one of the toughest.

#36 Ville Lastikka
This young guy will show you his strong shots and nice passes. Lastikka became known internationally, when he represented Finland in his first Men’s World Floorball Championships in 2018. 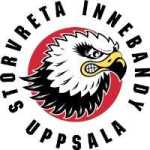 The process during the season so far has been good. We have trained hard for Champions Cup and feel prepared for it. The expectations of Champions Cup is to have a great experience competing against the best teams from the best leagues of the world.

#80 Viktor Klintsten
Viktor has been Storvreta’s first keeper for many years and is a strong contributing factor to the club’s success over the years. He looks sharper than ever and will be the different between winning or losing.

#97 Robin Nilsberth
Robin Nilsberth came to the club a couple of years ago. Has been a strong contributing factor to the great successes of recent years for Storvreta. Has an offensive quality that few defenders have and with his shot he poses a threat regardless of distance to the target. Important player both on and off the pitch. Has extensive international experience as he has represented the Swedish national team for many years.

#77 Tobias Gustafsson
Tobias Gustafsson is a really attractive player. Offensive and technical. An irrational player who breaks patterns regardless of the resistance he encounters. Can also play centre. Has represented the Swedish National Team for many years and was one of the key players for Storvreta in last year’s playoffs. Is a player that every coach would want in his team.

Wiler-Ersigen is building an new team, with many young players, after achieving the Swiss record of winning 12 championship titles. The team has changed a lot, but also has some spectacular Finnish world champions in the team. The aim is to win a medal.

#19 Matthias Hofbauer
Swiss floorball legend. All-time leading scorer of the World Floorball Championships with over 1000 scoring points also in the Swiss league. He is playing his last international tournament of his career.

A fast, sharp and hungry team. This year suffering many injuries of the key players, but slowly getting into the shape. The main principle of fports is to do your best and win, and that is exactly what the team wants to do in CC 2020.

#31 Josef Rýpar
Can play both forward and defender. Physically strong player who is great in international games.

He is smart, creative and has a great vision. Great floorball brain.

*The information here is provided by the teams and only modified by the IFF.