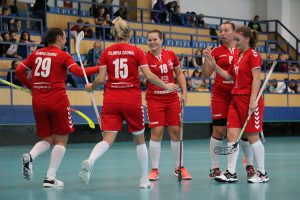 There was quite a battle to begin the second day of the EuroFloorball Cup 2019 in Slovakia. Olimpia Osowa got off to a great start when #29 Malwina Zagórska showed some striker’s instinct and scored from behind the goal for Olimpia’s first goal. Within three minutes Polish team had doubled their lead when #15 Anna Raczkowska got a lovely cross from Zagórska and made it 2-0. On the powerplay the Spanish team managed to get themselves in the game when #6 Paula Arenal Beltran  scored CDE El Valle’s first goal. One more goal from each side and the first period ended 3-2 in favour of Gdańsk. The Polish team was showed some real determination in the second period scoring another three. The Spaniards were able to close it to one goal again during the period through a powerplay goal to #26 Maria Alonso Lopez-Zuazo, but Gdańsk continued to extend their lead in the final period to secure the points with a final result of 9-4. The best players were #13 Ewelina Nowaczyk and #1 Patricia Amores Puhl. 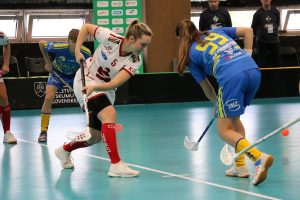 Nauka-SAFU played their first match of 2019 EuroFloorball Cup against yesterday’s winners – UHC Sparkasse Weissenfels. The Russians opened the scoring in the 5th minute when #11 Mariia Kitaeva found a way to the German’s goal. Weissenfels looked for a response but Nauka’s goalkeeper #85 Anna Kolts was not to be beaten early on. Despite the Weissenfels pressure it was Kitaeva who netted for the second time. Attempts came and went for both sides but it was Nauka who led 3-0 after 20 minutes. Kitaeva broke through the Weissenfel’s defence again and again, even scoring two short-handed goals leaving no doubts about the Russian dominance in this game. Weissenfels could not find the rhythm and although they managed three goals late in the game it seemed that they had decided to save their energy for other matches. It was a masterful performance from Mariia Kitaeva (4+3) who was awarded with the MVP for her team. The best player from Weissenfels was #5 Pauline Baumgarten. 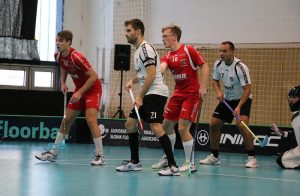 FBK AS Trencin had beaten Komarom 7-4 in the Men’s group A opening game, but in their second match they met a much tougher opponent. Greåker IBK had a perfect start and led 1-0 after 8 minutes. Slovakian striker #88 Ondrej Kusenda who scored 5 yesterday responded after two minutes with a distance shot and the result was even again. Greåker scored two goals within only 4 seconds when #48 Thobias Hjort won the face-off and surprised Trencin’s goalkeeper, the former Czech national keeper, #69 Tomas Kafka with the perfect shot to the top corner. The Norwegians had the power to control the second period and built a commanding advantage giving no chance for Trencin despite their good ‘home’ support. The 6-2 result after the second period gave the Nordic side a lot of confidence and they only extended their lead in the last period. The final result was 11-2. Overall, 9 different players scored 11 goals for Greåker while Trencin’s top scorer Ondrej Kusenda has scored 7 out of total 9 goals for his team in two matches. The best players were #69 Tomas Kafka with a total of 36 saves and #88 Kristoffer Bakke (2+0). 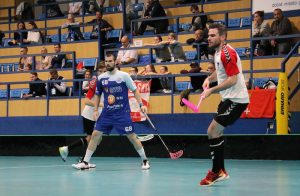 To close out Day 2, Tsunami Zahorska Bystrica (SVK) played their opening game and took the points against Phoenix Fireball (HUN). In the first period, Tsunami were simply faster than their opponents. Faster in passing, moving, shooting. Slovak national team player, #8 Martin Kubovic opened the scoring for the game, putting the ball into the net from right beside the goalpost. He was a livewire throughout the game and proved a handful for Phoenix. Tsunami dominated the scoring in the first period leading 3-0 but it could’ve been more, with several of their shots taking sharp deflections off the goalpost and almost crossing the line. The Hungarians also hit the post, the most notable a penalty shot from #20 Domokos Racz. A lapse of concentration from the Tsunami defence in the last minute saw one of their passes go straight to Phoenix player, #19 Daniel Sebrek who had an easy shot to put the score at 3-1. The pace of the game went down a little in the second period and the only score was a powerplay goal by Kubovic towards the end of the period.  With a 4-1 lead, Tsunami were put under pressure as Phoenix pushed to score. They got one back, but when Tsunami scored again with 5 minutes to go it seemed the threat was over. Phoenix clearly didn’t agree and kept the attack going. They got two, took their goalkeeper off, and got a third, all in three minutes to bring them within just one goal. Still without a goalkeeper and with only a few seconds left in the match, Phoenix lost control of the ball and Tsunami scored to the empty net to end the game at 7-5. Best player awards went to Kubovic and the Phoenix goalkeeper#44 Jani Sandor.