The final day of the 2016 World University Floorball Championships saw some fantastic matches to end the tournament. The medals were shared between the top four countries, but it was Finland that was the big winner taking home both of the gold medals, winning the women´s match on penalty strokes and the men´s in extra time.

The week has been a tremendous success with great work from the local organisers to provide a wonderful tournament for all the participants and was for Floorball Portugal an important step in their development. Portugal began the tournament having never played an international match and they have ended the week with 3 wins over far more experienced opposition. Twice they beat Korea and today in the match that would decide the final placings they beat Japan 5-3. The Japanese women played Poland for 5th place and they defended strongly, keeping the high-scoring Polish team to just 2 goals. They were wonderfully supported by a very loud and enthusiastic cheering squad – their men´s team. The Polish were disappointed losing their crucial match earlier in the week to Czech Republic, especially after being in the lead, but their 5th place is equal to their ranking at this event so they have played to their level.

The other minor placement match saw Spain and Slovakia men playing for 5th. Slovakia have been in a difficult position – clearly much better than the other teams in Group B, but when they played one of the Group A teams (Czech Republic) they were also clearly outplayed. They made easy work of Spain today winning 11-0. Spain were surprised with their loss to Korea in the first game of the tournament, but they recovered well after that and won games against Japan and Portugal. The loss of their only goalkeeper to injury during the week impacted on their chances of doing any better than their 6th place.

In the bronze medal matches, it was Czech Republic against Switzerland in both the men´s & womens. The women´s game was very closely contested. The teams had not met previously this week as Czech Republic played in Group B, but the players and coaches are well acquainted, especially in meeting for bronze medal matches. At university championships they have only met once previously and that was a 10-3 blowout to the Czechs, but there was no chance of the Swiss letting that happen today. They got the first goal and although the Czechs equalised in the first period by the end of the second they had a 2 goal lead at 3-1 after converting a powerplay goal. It was the rhythm of the game – Swiss score, Czech equalise – even through the final period, the Swiss just couldn´t break away from the Czechs on the scoreboard. The game went to overtime and when a rebound from the Swiss goalkeeper went high, Denise Ratajova calmly waited for it to fall low enough and under immense pressure from the defence snapped it into the goal to give the Czechs the bronze medal.

The men´s game was just as exciting and well-contested. They had played in each other in the first of the group matches and it had been a high-scoring affair in which Switzerland scored the winning goal in just the last minutes to win 9-8. Today both defences were playing a much tighter game and there were hardly any chances given for scoring. With a few minutes left in the game, Switzerland held a 2-1 lead, so Czech Republic were forced to play a riskier game to try to equalise. They had been pressing for several minutes with 5v5 but no success in scoring. They took their goalkeeper off to give them the player advantage but lost the ball immediately and Switzerland played to the empty net to win 3-1. A slightly disappointing finish to such a tight game, but a good win for Switzerland.

As it should be, the two final matches were by far the best of tournament. The Finnish women´s team had many players who had been part of the silver medal team from the 2015 Women´s WFC as did the Swedish team, however, the Swedes had many more players with far less international experience than the Finns. There was a goal to both teams early in the match but that was the only scoring in the first period. The Finns missed several open net chances which is not something you can usually afford to do against an opponent like Sweden. The game was played at a high tempo from the first buzzer to the last which, considering the over +30 degree temperature in the venue, was a credit to the fitness of the players and their willingness to give their all. The play was not dominated by either team and both again had chances in the second period, but either the shots were blocked or saved or hit the posts, but nothing was finding the net until the last minutes of the period. After Anna Wijk scored to take the 2-1 lead a Finnish player was penalised for an unnecessary shoulder bump on her. The Swedes were looking to extend their lead going into the final period but it was the Finns that surprised them with a short-handed goal to captain Mia Karjalainen.

The final period was tense. The full stadium was evenly split in their cheering and the players were putting on a great show. As in the second, the scoring opportunities were there for both teams but neither could quite hit the mark and the match went to overtime, and with still no goals to penalty shots – a replay of the women´s final from the 2015 World Championships between these two countries. The Finnish shooters were on target in the penalty shot competition and their goalkeeper Tiltu Siltanen did her part making 3 saves. Jaana Lirkki´s successful shot was the decider and the Finnish women were crowned the champions.

The nordic neighbours faced each other again in the men´s final and it was an equally exciting and tight match. In their group game, Finland had beaten Sweden 9-4, but since that opening game Sweden had steadily improved while Finland´s performances seemed to be going in the other direction. The first period was evenly balanced although the Swedish attack looked more dangerous than the Finns. The Swedes seemed to have no problem opening the game and were able to move the ball into their attacking zone quickly, putting the Finnish defence under constant pressure. A somewhat harsh penalty for holding went against Finland and Sweden took advantage of the extra space to shoot. Jens Milesson´s shot from wide went flying past the Finnish keeper into the top of the net to give a 1-0 lead. Not long after, Swedish captain Simon Jirebeck attacked directly at goal and he finished with a soft touch backhanded chip past the keeper.

The Swedes started the second period at full pace and were all of a sudden dominating the game. Two quick goals and now behind 4-0, Finland were in danger of losing their chance in the game. Head Coach, Petri Kettunen, called a time out and the Finns came back to court with a new determination and their comeback began. Their first came from a corner free-hit, where the pass directly from the corner found Mika Kailiala in space in front of the goal and his slap shot found the net. Two minutes later the Finns had a second when Sylvester Raikamo shot from out wide. He didn´t hit the ball cleanly but it was enough to sneak under the fingertips of the Swedish goalkeeper. The Finns were right back in the game and the momentum of pressure moved in their favour. Before the end of the period, Kailiala made a nearly exact copy of his first goal and set up a big final period with the score now at 4-3.

The game was getting more physical as the final period progressed, but the referees managed the players well, and despite the tough contact and intense play, there were no more penalties in the game. It was Raikamo for his second who equalised with about 10 minutes left in the game, and somehow the exhausted players found another gear. The speed of the players and their skills with the ball under such pressure and with such physical exertion in the extreme temperatures was remarkable. Both teams created scoring possibilities in the final minutes and both goalkeepers made some great saves. There were also chances that should have definitely been converted but with neither team´s defence cracking, they headed into extra time. 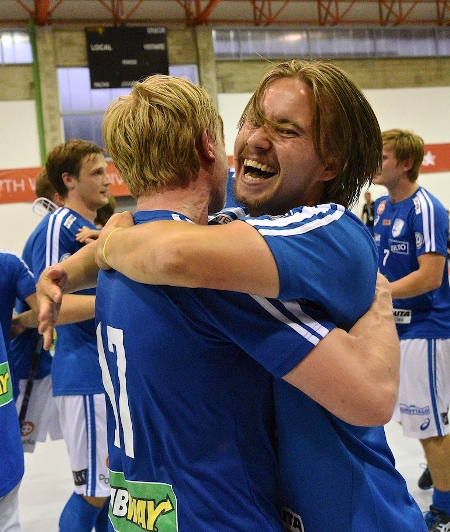 An injury to Jirebeck early in extra time that forced him to exit the game was a big loss for Sweden. He had looked like the most likely to score for Sweden, aggressive with the ball and on nearly every attack he either created a chance for himself or a team mate. Finland´s third line came the closest to scoring early but it was their first line with Kailiala & Pylsy looking the most dangerous near goal. In the end it was a monster shot from Ilari Talvitie from right in front of the Swedish bench that rocketed into the far top corner of the goal to give Finland their second gold of the day.

There will be lots of highlights for the teams – especially those who won gold medals – but for all the participants they will take away some wonderful memories from the event, not just from the floorball court. The police escort of the team buses for the opening ceremony, the parade through the old town of Porto, a river cruise and the perfect summer weather are just a few. Thank you Porto, FISU, University of Porto, FADU & FAP – a job well done.