The biggest adult floorball club tournament in the world celebrated its 30th anniversary this year in 2022. The Czech Open took place this previous week from Thursday to Sunday and had its first event all the way back in 1993. Elite club teams from across Europe return to the Czech capital after two years of pandemic disruptions. This years 30th anniversary celebration were also accompanied by a video documentary of the history of the tournament.

The Czech Republic is one of the most important nations on the world floorball scene. Several floorball tournaments take place there every year, including the Prague Games and Prague Masters, The Czech Open is the world’s most international club floorball tournament and since its inception in 1993, the event has had as many as 4,300 participating teams from over 30 different countries. There were 6 different categories this year from men’s and women’s elite level, showcasing teams from the top 4 floorball leagues in the world, to the men’s and women’s open division allowing any team and ability to enter and play! In total teams from 14 different European countries took part with approximately 2,500 floorball players participating in the Czech Open 2022! 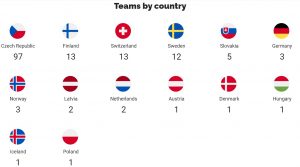 The Czech Open tournament also celebrated its 30th anniversary in 2022! In honour of this achievement a documentary showcasing the history and significance (alongside some memorable moments!) of the Czech open tournament was created by the organisers.

The results from the Czech Open are as follows: 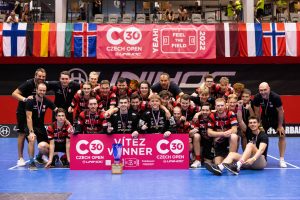 The men’s elite final which closed the event on Sunday evening saw Czech top division side Tatran Střešovice beat Pixbo Wallenstam IBK from Sweden. Swedish side Pixbo ended up with their winning female goalkepeer, Lara Heini, on the bench for the men’s final as starting men’s goalkeeper Jon Hedlund had to leave the competition early. Lara who is part of the Swiss women’s national side got the call to play on Sunday morning before the women’s final and went on to win with her Women’s Pixbo side against Falun before suiting up again later on for the men’s final, ready to play in place of new starting goalkeeper, youngster Albin Flöjner. 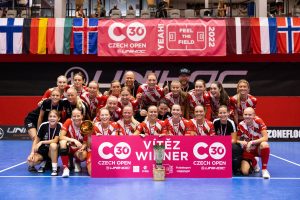 For more information on the tournament check out czechopen.cz.