On July 29, the Happy Goalie camp for goalkeepers took place in Lviv, Ukraine. The Happy Goalie Camp is an international project to help the development of goalkeepers in different parts of the world. The camp was conducted by professional Czech goalkeeper, Jan Eckhard, who has played for several years in the top league of Sweden, the SSL and in Switzerland. He was also previously part of the Czech U-19 national team. Coaching alongside Jan during the camp was Ukrainian national team goalkeeper Oleksandr Semeniuk.

This year’s camp took place in Lviv, Ukraine and was primarily to help young Ukrainian goalies giving them a chance to learn from a top level goalkeeper for the first time. 7 goalkeepers from Melitopol, Novoyavorivsk, Dnipro and Lviv in Ukraine took part in the camp.The day comprised of 4 training sessions of 75 minutes each, during which the specifics of goalkeeper warm-up, transfer technique, reaction exercises and dynamics of movements were talked about and practiced. Throughout the camp, there were also competitions between goalkeepers, points were collected, and at the end there were gifts: balls, T-shirts, bottles and others. The best were given green goalie helmets! 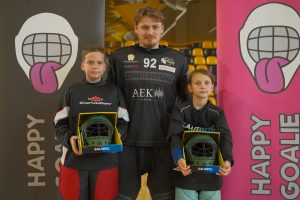 At the end, the participants presented Jan a t-shirt and a flag of Ukraine, on which they left commemorative signatures.

“This camp is a very good opportunity for our goalkeepers to get support and motivation to move and improve. Also, the fact that Jan Eckhard visited Ukraine, despite the state of war, gives moral support to all floorball in Ukraine here and abroad.” These were the words of VolodAr Ilyk who along with local club Lemberg helped organise this camp in Ukraine. “We express our gratitude to the Emily Resort recreation complex, on the territory of which there is a modern sports hall. Personally, Oleg Shkura for his help in conducting the camp.” Ilyk went on to say.

The camp was held with the support of the Ukrainian Floorball Federation and also one of the most experienced goalkeepers of Ukraine Oleksandr Semeniuk .

Sweden and Finland to play in charity match for Ukraine