Sport is back and here to stay. With players – including Singapore’s athletes – given the opportunity to acquire valuable high-quality competition experience through putting their skills against a variety of different playing styles, floorball fans and followers here will also stand to benefit from the entertaining displays of speed and athleticism on court. A key part of the floorball community in Singapore comprises schoolgoing youth – over 300 floorball teams from more than 100 schools participate in the annual National School Games, and there are 14,000 participants from the primary to university levels.

The second edition of the Women’s AOFC Cup on 23 – 28 May will feature six teams. The AOFC Cup is held every year with the women’s edition taking place on even years while the men’s competition is held on odd years, ensuring that all players have at least one international tournament to look forward to each year. The first-ever Women’s AOFC Cup was also hosted by Singapore in 2018, and the national women’s team clinched the title with a 4-1 win over runner-up Thailand.
– Playing on home ground is always special and we’re all looking forward to competing in Singapore again. We hope both floorballers and those who are keen about the sport are excited to catch both the women’s and men’s teams up close in action. Winning the Women’s AOFC Cup in front of a home crowd in 2018 was definitely a memorable and honourable experience. The team is training hard to put up a good fight to retain the title and do Singapore proud, mentions Singapore women’s captain Michelle Lok who was part of the 2018 team.

The men take to the floor from 31 May – 4 June and eight teams from the Asia Oceania region will congregate in Singapore for their opportunity to secure their place in the upcoming Men’s World Floorball Championship 2022 in Switzerland. The teams are: Singapore, Thailand, South Korea, New Zealand, the Philippines, Japan, Malaysia and Australia.
– We’re excited to play in front of our family, friends and supporters. We’ve learnt a lot from our recent outings at major tournaments such as last year’s World Championships and have been working hard to improve all areas of our game in preparation of the Men’s WFCQ – AOFC. Floorball is a sport we love and enjoy playing, so we hope the fans who come also enjoy the matches and get to learn a little more about the sport, said Singapore men’s captain R. Suria.

– The Women’s Asia Oceania Floorball Confederation Cup and the Men’s World Floorball Championship Qualifiers AOFC are events that feature some of the best floorball athletes from the region. Staging these tournaments is a boost to Singapore floorball. In addition to providing valuable competition experience for our current players, we hope these events generate more interest among those who may not be familiar with floorball, as well as inspire our future floorball players through watching top athletes in action, said Singapore Floorball Association president Kenneth Ho. 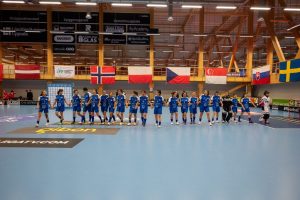 – Our national floorball teams have featured prominently on the international stage in recent years, and the Singapore Floorball Series will provide an opportunity for them to play amongst the best on home ground. Not only will this series see the men’s team vying for a spot in the upcoming men’s world championships, but it will also give the international floorball community a glimpse into the world-class stage that the 2023 IFF Women’s Floorball Championships will be played on. By giving Singaporeans a front row view of world class floorball action and a chance to cheer the national teams on as One Team Singapore, we hope the event will inspire the growing base of local floorball enthusiasts and encourage more people to take up the sport,said Dr. Su Chun Wei, Chief of Singapore Sport Institute, Sport Singapore.

– It is our honour to organise the Singapore Floorball Series and our commitment to the floorball community. It gives floorball enthusiasts here and in the region more opportunities to play amongst their peers and to better their game. Kin Productions is heavily involved in the sports industry and the energy witnessed at such events is uplifting and inspiring. We can’t think of a better way to celebrate as we adjust to living with Covid-19, said Vincent Chai, director of Kin Productions Pte Ltd.

As the national sports agency, Sport Singapore’s core purpose is to inspire the Singapore spirit and transform Singapore through sport. Through innovative, fun and meaningful sporting experiences, our mission is to reach out and serve communities across Singapore with passion and pride. With Vision 2030 – Singapore’s sports master plan, our mandate goes beyond winning medals. Sport Singapore uses sport to create greater sporting opportunities and access, more inclusivity and integration as well as broader development of capabilities. Sport Singapore works with a vast network of public-private-people sector partners for individuals to live better through sport.

The Singapore Floorball Association (SFA) was formed in 1995. It aims to encourage, develop and manage the sport of Floorball at national and international levels in Singapore. It also strives to promote Floorball to countries within the region. The association is constantly working to increase participation in Floorball and provide more playing opportunities for Singaporeans of all ages.

SFA supports its national teams in international competitions such as the World Floorball Championships and Asia Pacific Floorball Championships. The association consistently works with the relevant organisations to encourage the inclusion of Floorball on the rosters of major Games such as the SEA Games and the Commonwealth Games. Through its efforts, SFA believes that Singapore will have the top-ranked men and women national teams in Asia.

SFA manages the development and promotion of the game to more than 15,000 players, more than 200 schools and 100 clubs. Through the organization of Singapore Floorball Leagues, National Inter-Schools tournaments, coaching courses and officiating seminars, SFA aims to promote Floorball to Singaporeans of all ages and continuously improve the standard of the sport locally.

Founded in 2017, KIN is a sports event agency that specialises in major sporting events. The team adopts a multi-disciplinary approach, paired with vast experience in taking on pivotal roles in consultancy and management in collaboration with various Organising Committees of Major Games & Championships.

Comprising specialists in planning, design, technical production and implementation, the team lives by a shared statement of purpose and guiding principles: To elevate the sports scene with our services around Southeast Asia through our expertise and collaboration with local and international industry players.