UN International Day of Sport for Development and Peace

Due to its vast reach, unparalleled popularity and foundation of positive values, sport is ideally positioned to contribute towards the United Nations’ objectives for development and peace. To raise awareness of this potential, 6 April was declared as the International Day of Sport for Development and Peace (IDSDP) by the UN General Assembly. The adoption of this Day signifies the increasing recognition by the UN of the positive influence that sport can have on the advancement of human rights, and social and economic development. (source United Nations)

With the current situation in Ukraine the topic of peace has become more relevant than ever. A large number of sport organisations, IFF included, have condemned the hostilities towards Ukraine and suspended Russia and Belarus teams from its events.

Sport has the power to change the world; it is a fundamental right and a powerful tool to strengthen social ties and promote sustainable development and peace, as well as solidarity and respect for all.

Sport is in a unique position to display leadership, to take responsibility for its carbon footprint, engage in a climate neutral journey, incentivize action beyond the sporting sector, and play a major role in amplifying awareness among its billions of spectators, facilitators and participants at all levels. With the need for urgent action growing more dire every day, the relationship between sport and climate must be better understood and ways of developing policies and taking concrete action to help reverse the impact of climate change through sport must be communicated to as wide an audience as possible. (source United Nations)

This year the theme for IDSDP is climate action in sports. As a signatory of the UN Sports for Climate Action network the IFF wants to support this event. As peak of development in the floorball world we want to share the plans of the World Floorball Championships (WFC) 2022 in Switzerland. The local organising committee (LOC) has the overarching goal to reduce the carbon footprint of WFC by at least 50% (compared to the CO2 emissions of the WFC 2018) and have baptized their sustainability goal the “Green Goal“. In cooperation with the climate fund myclimate the LOC has five key areas in which reduction possibilities and solutions have been identified: arena, teams, travel for fans, food and material/waste. Further, the unavoidable emissions will eventually be offset through myclimate managed compensation projects. It is noteworthy that also spectators can choose to participate in offsetting through a voluntary payment in the ticket purchase process or travelling to the games with the provided special train from Berne to Zurich Altstetten. 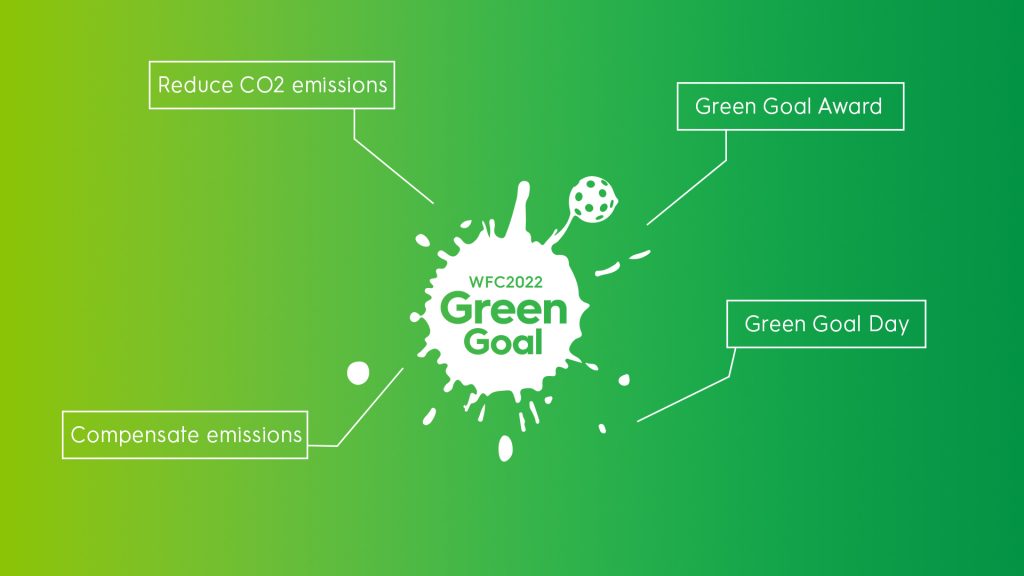 To advocate the cause and educate the audience a Green Goal Day will be organised on the 10th of November during the quarter-final stage of the championship tournament. As part of Green Goal Day, the Green Goal Award will be presented live during a third-period break. The award will go to the floorball club that has submitted an exciting and feasible project to reduce its own CO2 emissions. The Green Goal Award is endowed with a prize money of CHF 5,000, which should financially support the implementation of the project idea. Further bulletins and surprises are planned to run through-out the day.

Teams from Europe clear for the WFC 2022 Final round