The IFF Referee Committee has nominated seven referee pairs from five different countries to the Men’s World Floorball Championships 2020. The committee also nominated Mr. Tony Holmer from Sweden, as the Head of the Referees. Mr. Petr Seda from Czech Republic, Mr. Frank Lauenberger from Switzerland and Mr. Sami Rahikainen from Finland are the referee observers in this event. 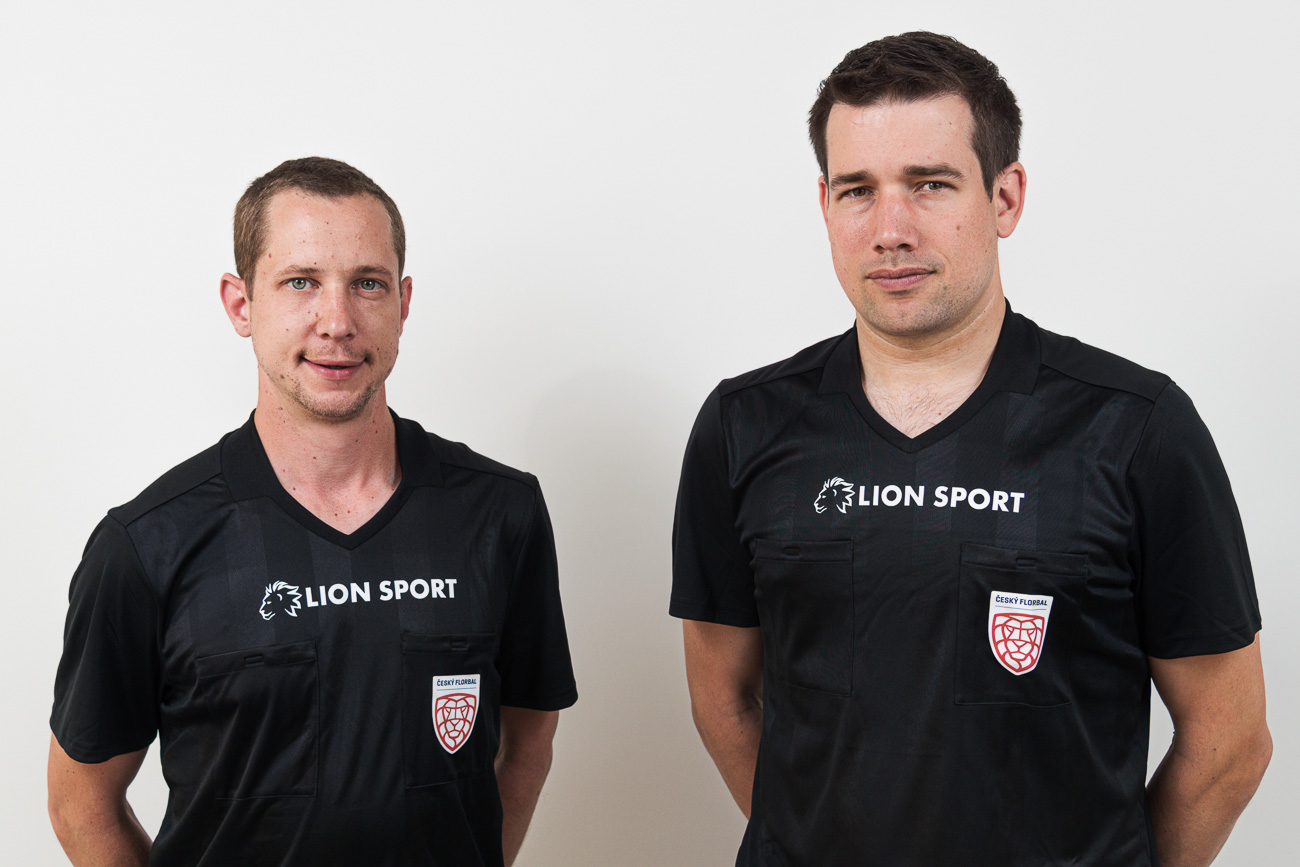 Jakub – 37-year-old from Prague. He works as a Director of Operations in Czech Floorball. His first season as a referee was 2000/01, in Czech highest league from 2008/09 and IFF Referee since 2015. He refereed together with Vlastimil the MU19 WFC in Brno 2021 and 2019 in Halifax. Besides floorball, he likes outdoor activities such as hiking, backpacking, canoeing and gardening.

Vlastimil – 39-year-old from Prague. Husband and father of three. He works as Key Accounts Sales Director in Adidas. He has been a referee for more than 20 years. He has refereed together with Jakub for 14 years. IFF Referee since 2015. He spends a lot of time with his family, he likes sports, playing guitar and travelling. 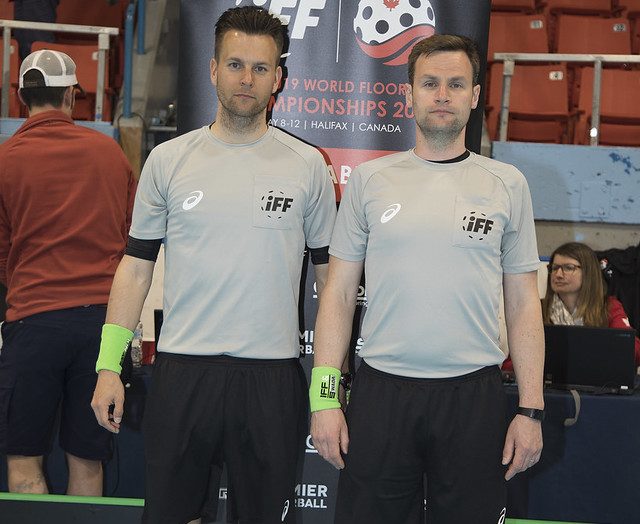 Thomas – 42 years old, living in Helsinki. Husband and father of two. He works as an electrician. In his free time he plays both floorball and football and is also coaching his daughter’s football team. He’s been on the international level since 2016.

Janne – He lives in the city of Vantaa next to Helsinki and works as a consultant. He is 36 years old and has been a referee for more than 18 years. He has been on the international level since 2016. In his younger years he also spent some time in Australia, also refereeing floorball there. 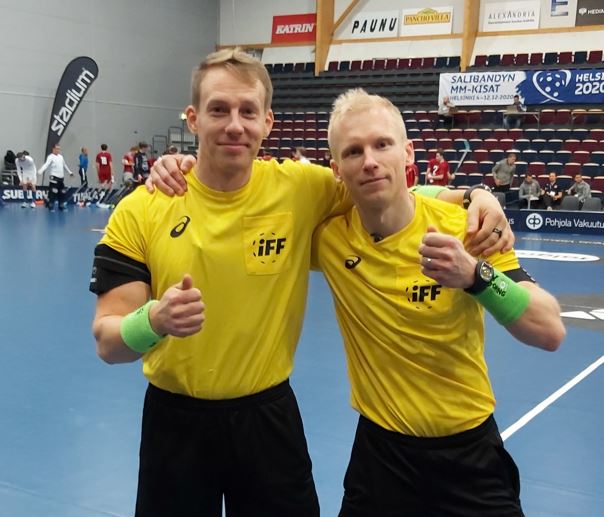 Henri – 37-year-old engineer from Helsinki. He has several golden medal games in the highest Finnish league in his CV as well as the semi-final SUI v SWE in Prague in 2018. He started his international career at the beggining of 2013.

Manu – 41 years old, living in Espoo with his wife Elli and 1,5 year old son Iivo. He has been refereeing in Finland since 1999, in the highest Finnish league since 2008. With Henri, he refereed (Salibandyliiga / F-Liiga) finals in 2015 and 2021 and the Super final in 2016. He has been a part of Champions Cup in 2015 and Men’s WFC in 2018 in Prague (semi-final). He graduated from Aalto University with Master of Science degreee in Civil Engineering and Construction Management. He works as Development Manager of Service unit in Infrakit. He spends a lot of time with family and likes crossfit and Rock ‘n Swing dance. Fun fact, he participated 11 years in a row to The Guild of Civil Engineers festival. 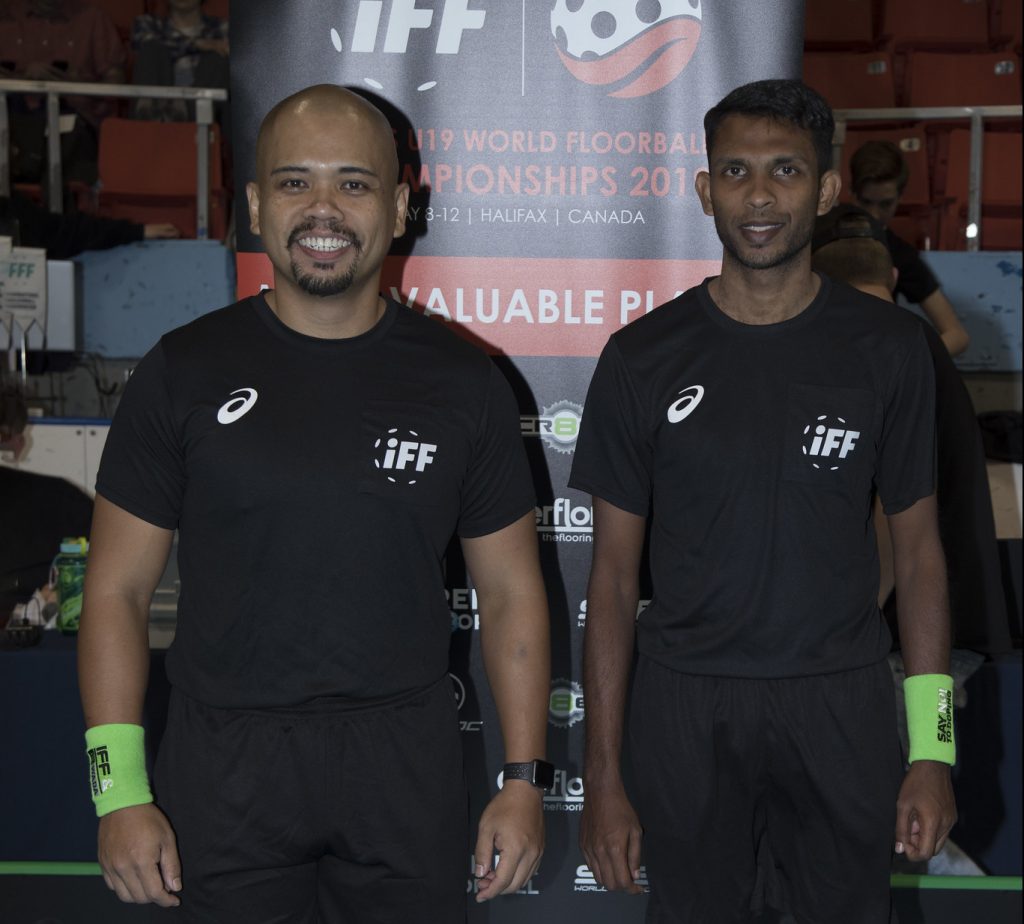 Sharil – 38 years old, from Singapore. He works as sports coordinator. Referee in Singapore for 20 years, IFF Referee since 2010. With Oswind, he has been a part of two Men’s U19 WFCs. WFC 2020 in Helsinki will be his first Adult WFC. In his free time, he likes powerlifting and listening to music.

Oswind – 32 years old, from Singapore. He works as a sports coach mainly concentrating on floorball and football. He is also a football referee in Singapore. With Sharil, he has refereed two Men’s U19 WFCs and WFC 2020 in Helsinki will be also his first Adult WFC event. He also has several Asian WFC Qualification events in his CV. In his free time he plays football, futsal and floorball. He likes watching movies and hang out with friends and family. 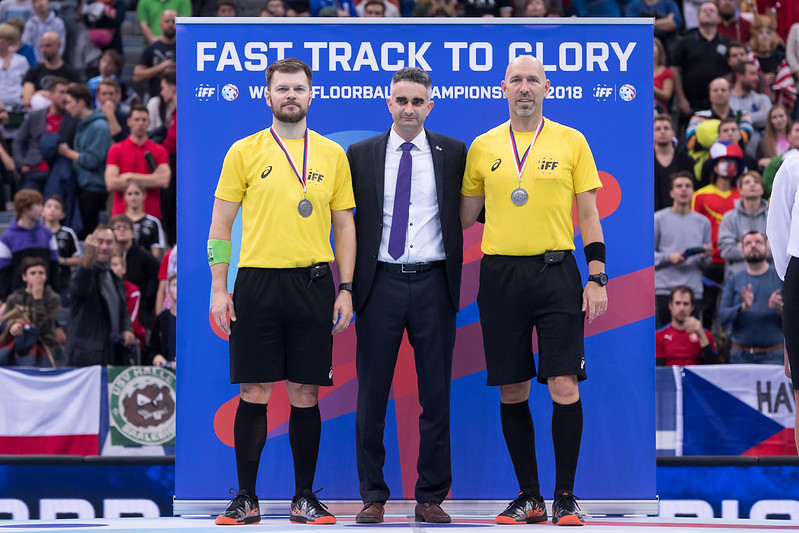 Glenn – 47 years old, from Stockholm. Father of two. He has refereed 510 games in the Swedish highest league and 63 international games. IFF Referee since 2008 with three Men’s WFC and two Men’s U19 WFC in his CV. He works as an IT Consultant. He spends a lot of time with his family, children and friends. He likes crossfit. Fun fact: he completed 5 marathons.

Håkan – 53 years old, living in Jönköping. He is married and has twins – 7,5 year old. He has refereed 452 games in the Swedish highest league. With Glenn he has officiated six men’s finals in Sweden and one women’s final. He works with floorball in the district Småland/Blekinge with referees and competition. He has been a football referee for 26 years. He likes playing golf. His life is all about floorball – he says ;) 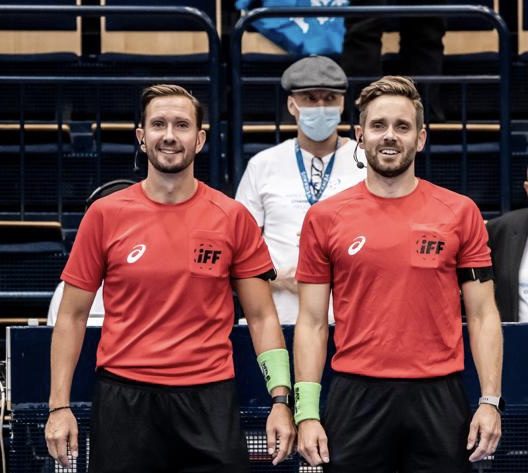 Thomas – 44 years old from Stockholm. He has a girlfriend, daughter and a cat. He has been a referee for over 28 years, in the Swedish highest league since 2002. IFF Referee since 2006, together with Rickard since 2009. Professionally, he secured 5G for Europe in the last couple of years. He is going to be a Global Key Account Manager starting in 2022. In his free time he likes spending time with family, training, cooking and having fun travelling to new places. Fun fact: Just bought a new motorcycle! Tries to play football before refereeing as warm up.

Rickard – 41-year-old, living in Stockholm. Married and has three daughters and two border collies. He used to play floorball together with refeereing up to the Swedish Allsvenskan. 14 seasons as SSL referee, with two Men’s WFC and four Champions Cup in his CV. He works as a Managing Editor/Chief Planner for Swedish Police. His free time is all about his family. He has a background as a military officer. Aiming to referee floorball in the Olympics. 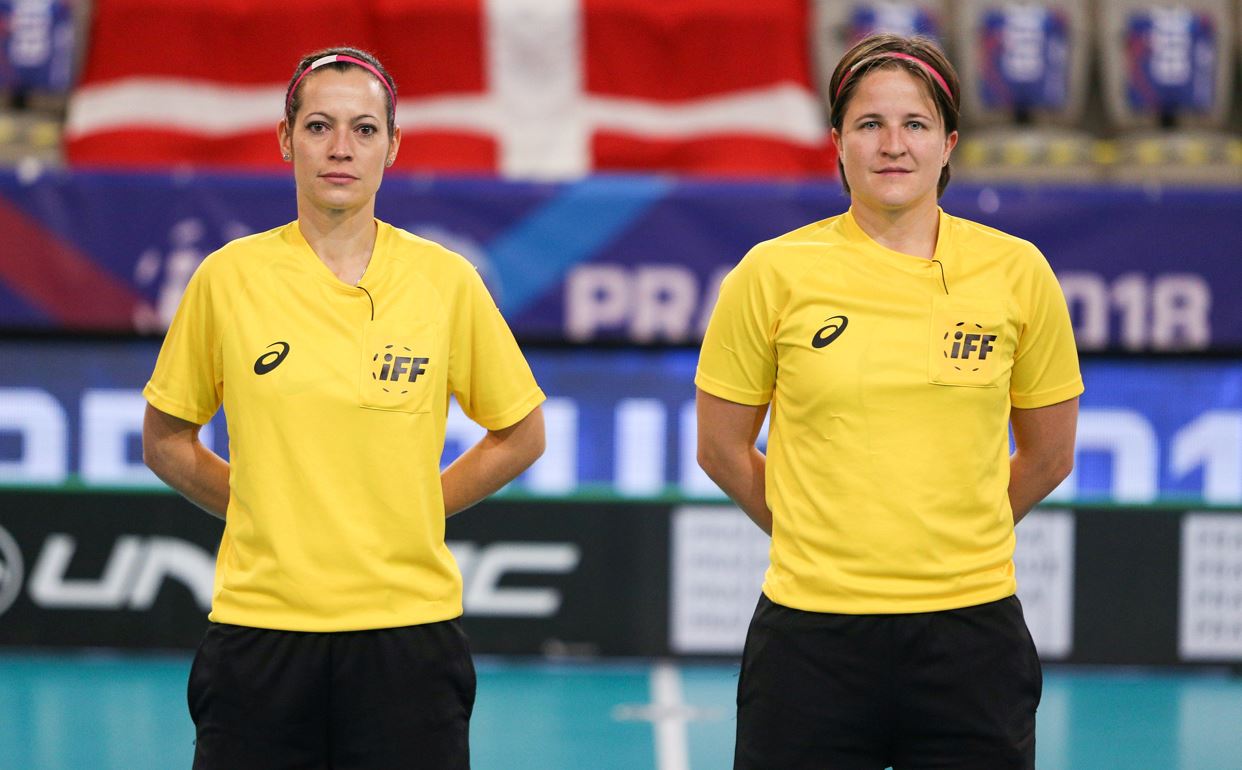 Sandra – 36 years old, living in Bern. She has been a referee for 17 years, 15th season together with Corina, 8th season in NLA – highest men’s league in Switzerland. Internationalwise she has been a part of Women’s WFC in 2015, Women’s U19 WFC in 2016, Men’s U19 in 2017 and Men’s WFC in 2018 in Prague as well as two Champions Cups and five Euro Floorball Tours. She is a lawyer and working for Federal Tax Administration. In her free time she does sport, cooking and meets friends. Fun fact: Together with Corina, they were first ever women to referee at Men’s WFC in Prague and also first ever women to referee in SSL (2021).

Corina – 34-year-old from Zurich. In relationship. She works a sports scientist. In floorball as a referee for over 17 years, together with Sandra referee for 15 years. It’s her 8th season in NLA. Internationalwise she has been a part of Women’s WFC in 2015, Women’s U19 WFC in 2016, Men’s U19 in 2017 and Men’s WFC in 2018 in Prague as well as two Champions Cups and five EuroFloorball Tours. Her favourite thing to do on free time is hiking, travelling and outside cooking. Fun fact: Together with Sandra, they were first ever women to referee at Men’s WFC in Prague also first ever women to referee in SSL (2021).