Floorball in Brazil: Paulistana are the São Paulo State Champions

After a long break of almost six years it was time to organize the Paulista Floorball Championships 2021. The final stage was held on Saturday, 30th October 2021 in Embu das Artes City, São Paulo State, Brazil.

The championships were organized by the Paulista Floorball Federation (FPFb) which is also responsible for the whole floorball development in the State of São Paulo and affiliated to the Brazilian Floorball Association (BFA). It was also the first time this championships were planned and executed by FPFb (previously it was overseen by BFA). All seven teams from the São Paulo state were participating. The Championship was run in two stages without any attendance (due to Covid-19), the first on October 16th at the AABB Arena in the City of Campinas where the 14 matches for the group stages took place. Moreover, the event was supported by city hall sports office of Campinas.

Then the final stage took place last weekend in Embu das Artes supported by the City Hall. During the group stage phase the future champion Paulistana Floorball was struggling and lost two times. But two weeks later during the semifinal they were fully awake and outclassed their main opponents and gold medal favourite Floorball Arca by 3-1. The other battle for semifinal had Invictus Campinas team A beating FloorGriffins by penalties shots after a tough and well fought tie 1-1 in regular time. For the bronze medal game Floorball Arca beat the rookie team FloorGriffins (first time ever at an official tournament) by 4-0. For the Grand Final match between Paulistana and Invictus Campinas team A expectations were high for both teams. But Invictus was not able to convert their chance for scoring a goal. In the end it was Paulistana who became the Champion by winning 3-0. However, Invictus Campinas got their best position in official tournaments. AD Curuça got the 5th place, followed by Invictus Campinas team B and Icebergs. 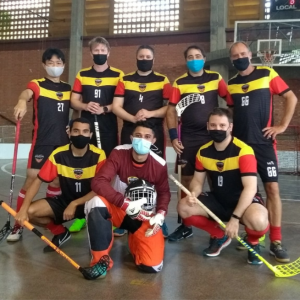