During the U19 World Floorball Championships the IFF has softly launched “Stick with it!” – its equipment recycling programme. Venues in Brno (CZE) and Uppsala (SWE) had on-site collection boxes for people to donate their old floorball equipment. The boxes are donated to the IFF by international packaging company DS Smith.

With the return of WFC events the IFF was finally also able to launch the long due recycling programme. Originally the launch was planned for the Men’s WFC 2020 which, due to Covid-19 was postponed for that year. The basic idea is to collect used floorball equipment during events and give it a new life. The received material is donated to a local charitable organisation or utilised as material to be shipped to developing floorball countries. The unusable material will either be recycled which primarily refers to the plastic and the rest will be managed according to local waste management regulations.

As the programme is not yet well established, the amount of collected material was quite limited. When the local Unihoc representative in Czech Republic heard about this he decided to step in. Within a few weeks after the event he had been able to collect close to 100 sticks, 50 balls, multiple goalie outfits and some additional material. 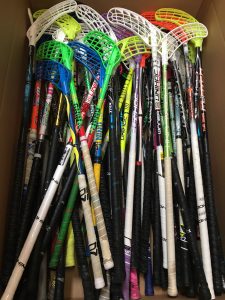 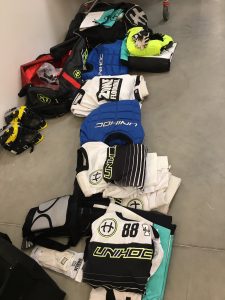 The collected material will benefit Kazakhstan floorball. All these equipments will be shipped to this young floorball nation. Representatives of the Kazakh federation were guests at the MU19 WFC in Brno and also met with the IFF to discuss development of the sport in their country. 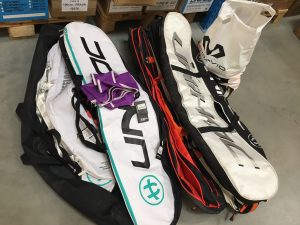 The material collected during the WU19 WFC in Uppsala will go to local organisations coordinating sports equipment for the underprivileged.

The IFF recycling programme named “Stick with it!” will continue during both upcoming WFCs, Women in Sweden and Men in Finland. Furthermore, the Helsinki metropolitan area training facilities Arena Center, Campo Sport and Esport Arena have kindly agreed to support the programme and collection boxes will be placed in these locations during the later part of September.

Referee nominations for WFC in Uppsala and Helsinki