Results from the Czech Open 2021

The traditional international club tournament Czech Open was held from 5th to 8th August 2021 in Prague, Czech Republic. 110 teams have been competing in various catergories.

This year’s Czech Open has experienced one of its highlights during the final of the female Elite W group. There were eight teams in this category, in the end, Vítkovice defended last year’s gold and became the winner. In the final, in a relatively even match, they defeated their opponents from Tatran 7:4. Nikola Liberdová in particular shined and scored a hattrick. Vítkovice were better particularly in the second period of the match, when they scored three goals and took a lead. A few minutes before the end of the game, Tatran gained hope thanks to a beautiful goal by Veronika Kopecká who hit the ball in the air while running and showed why she is the best scorer of this category. However, in the end, Vítkovice protected the lead well, and Tatran finished second.

TATRAN IS THE CHAMPION OF THE MALE ELITE

In the Elite M category, four Prague superleague clubs competed at this year’s Czech Open: Tatran, Sparta, Black Angels and Bohemians. The first two named teams advanced from the group stage to the final. A fierce battle was expected and judging by the results in the group, Sparta was perhaps a slight favourite as it beat Tatran 5:2 in the group stage. In the final, however, everything was different. Tatran was a bit more active throughout the match and had more possession of the ball. There was a lot to see in the match: six penalties, an unsuccessful penalty shot, a number of hard fights and nice goals. Sparta tried to make it 4:4 and pulled its goalie but the opponent added one more goal. Tatran (just like Vítkovíce last year) took advantage of the absence of famous foreign clubs and celebrates the gold. 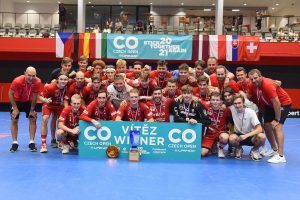 THE “PRO M” FINAL WON BY VARY AFTER A TOUGH BATTLE

Spectators in the UNYP arena at Podvinný mlýn saw the most interesting match of the day. The final of the Pro M category was a dramatic tug-of-war which Karlovy Vary won in the end. Although the Panthers were better at first and led 4:2 at one point, Vary was able to turn the score and suddenly it was 5:4 from their point of view. The Panthers equalized, but then the opponent stroke twice again. The goal to make it 7:5 in particular was beautiful – Jan Lang ran with the ball and perfectly surprised the Panthers’ defense. Daniel Nicklas from Karlovy Vary shined too as he scored a hattrick. 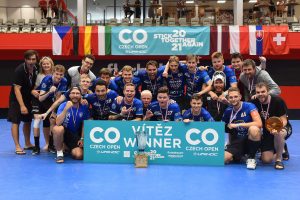 The final day of the Czech Open 2021 began with a battle between Bohemians and Tatran in the Open W category.

Neither of the two teams had lost a game at the tournament prior to today but it was Bohemians who had a better start to the final, as they shocked their opponents with two goals in the fourth minute. Tatran then recovered and the game was even but in the second half Vodičková added the important third goal for Bohemians after a pretty individual effort by Hebíková. In the end, Tatran scored at least one goal, as Lovíšková surprised the opposing goalie with a shot from the turn. Bohemians celebrates thanks to a 4:1 win while Tatran will have to settle for silver. 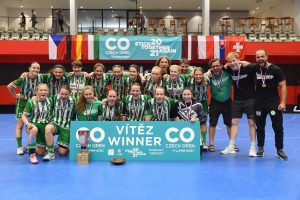