IFF Social Media Ambassador Tyler Brush is a very active floorball person in Canada since 2008. He is playing for the Canadian National Team almost for a decade. He represented Canada more than 35 times as a player and a coach for the Men’s U19 Team. Furthermore, Tyler is also a National Champion with Cambridge FC on national soil. As the Captain from Team Canada he had several opportunities to talk to players from all over the world.

There was no time to talk about meaningful topics during international tournaments. Now he believes it is time to start an international floorball podcast where players, coaches and referees can exchange their opinions, experiences and thoughts. As Tyler has been elected as one of the IFF Social Media Ambassador IFF is supportive of this idea and both parties will explore what kind of reactions will be collected.

— I wanted to start this podcast as a way to connect all the floorball players of the world. I have been lucky enough to train and play in many different countries in my career and have loved how similar and yet different the sport is in these countries. As players we don’t really have our own voice within the media, so this will be a fun way to share opinions and experiences of players from around the world, Tyler comments. 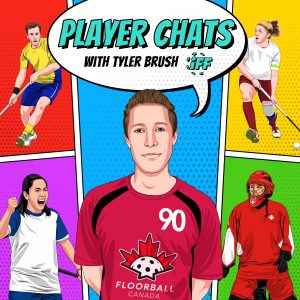