IFF Social Media Ambassador Patrik Schoultze, who represents team Philippine, will take over the IFF Instagram account on Thursday, 22nd of July. He will provide various insights from the Men’s national team camp.

Presenting IFF Social Media Ambassador Patrik Schoultze during the Philippine’s national team camp. He has been playing floorball for 14 years including two tournaments (SEA Games 2019 and Asia Oceania Cup 2019) for the Philippine’s national team as a forward. Patrik has played 11 games for his country and collected six scoring points during those fierce battles. Furthermore, he is currently playing at junior level for the Swedish team Tyreso Trollbacken.

The official start of the upcomings men’s national team camp will be on 21st July and will end on 25th July 2021 in Munka-Ljungby, Sweden. As a large numbers of national players are based in Europe the camp with be organised in the southern part of Sweden. Patrik will share the latest news, interviews and insights from that training camp.

— As an ambassador, I want to spread love and positivity about Filipino floorball and the whole sport as such, Patrik comments. 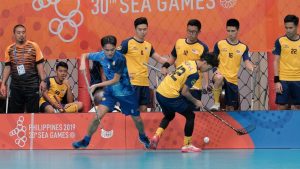 Patrik playing at the SEA Games 2019