Tomas Sladky has retired as a player. He was a key player in several teams; from 2006 until 2016 he has been playing 6 World Championships for Czech Republic and scored 21 goals and 9 assists. Tomas was playing in Sweden, Finland, Switzerland and of course in Czech Republic; the last four years for 1.SC TEMPISH Vítkovice. He is looking back on his career and sharing some of his thoughts and stories.

When and where did you get started to play floorball?

— OH, it was a long time ago! If I remember right, I was 8 years old and had test-practice at primary school. My first coach brought brand new floorball equipment (plastic sticks and plastic balls) and he introduced us to a new sport. I think it was in year 1994.

What was the reason to keep playing floorball?

— Dynamic sport – full of action, I fell in love with floorball immediately! Just before that, I have also tried football, but passion was missing there!

What you rate the best event in floorball?

— Now I must say, that every single floorball match is the best event! Especially after this covid-season and after my retirement! Nevertheless, the most memorable events are The World Championships (I have participated at 6 of them) and of course specially those, where we could celebrate some medals! Big competitions between all top nations are the most important for development of floorball!

How about you best experience in floorball?

— Best experience? When I met my first floorball coach and took floorball stick into my hands for the first time! I have had long and kind of crazy career, I would say, that every season was special for me and full of unforgettable experiences!

There is always two sides of the coin – what was your worst moment in floorball?

— Every time, when I got injured. Luckily, it has never taken me that long to get back on track. Because I took care of my body condition very professionally, I was able to play on the highest level for almost 20 years.

— I had a lot of fun during my colorful career but one funny moment I will remember forever. It was the year 2019, Superfinal of Czech league in Ostrava, my home-town. Sold-out ice-hockey arena, around 9000 fans were enjoying pre-game laser show. Me, as a captain of the team, I was waiting in the tunnel for the entering signal… But somehow, I ran out of the tunnel 30 seconds before the signal and suddenly I appeared in the middle of the field completely alone! Well, kind of weird feeling, but because I was totally „in the zone“, I didn´t care that much and in the end we won our title in Ostrava! – What a party afterwards! :)

Now you decided to stop playing as a player. What will you miss most?

— The team, the team-work, the team-spirit… I was always a team player and this I will miss the most. Especially our team of 1.SC TEMPISH Vítkovice, where I spent my last 4 seasons, it will be very hard to be out of this awesome group of perfect guys! 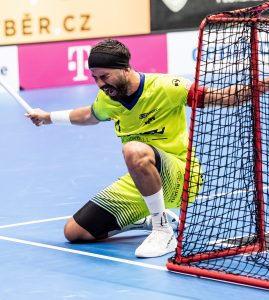 Is there also something that you won’t miss?

— The feeling of getting older on the field. Especially after hard physical practices or tough games it took me a little bit longer to recharge again. Recovery process was getting longer and longer.

Now you will move to Switzerland. How come?

— End of my player´s career was always connected with beginning of my coaching career. The offer from Chur Unihockey, where I´ve been playing in the season 2014/2015, came at the right moment. I will move there during July and start my hopefully long and successful adventure as a coach.

— Well, after very controversial end of my last game (Superfinal 2021), I´m kind of happy to jump right away into a new floorball pool. Floorball is my life, you can say it´s my lifestyle and I just can´t live without it!

What will be your role in Switzerland?

—  I will join Chur Unihockey as an Assistant-coach of the NLA-team and also as tactical coach for the U21-team. Furthermore, I will take care of my 5-month-old daughter Lara and support my wife Tereza who is coming to Switzerland with me as an experienced tennis-coach.

What are your floorball / life plans in general for the next few years?

— Plans? In this crazy time? :) I want to work along floorball as much as possible. Coaching is very specific job but I like challenges in my life! I have the motivation to reach my dreams as a coach as well but as of right now I will keep them as a secret!

Thank you very much for everything, and all the best for your future.