A fan survey was launched to investigate the perceptions of the floorball community on environmental topics. The survey was done in cooperation with the Glion Higher Institute of Education. The student project was part of an Applied Business Project.

The survey ran from 29th of January until the 4th of February. A total of  385 respondents fully completed the questionnaire. The gender split among the respondents was reflective of the IFF social media follower profile: ~69% male and ~31% female. It was no surprise that the majority of replies came from Czech Republic, Finland, Sweden and Switzerland making up 68% of all responses (to be noted that the respective federations of these countries also promoted the survey). The age range varied between 13 and 55+ with 28-35 year old being the biggest group.

It is encouraging to see that many people are already taking concrete measures to consider the environment in their every day lives. Out of a list of nineteen different daily tasks the most commonly undertaken were the following (number on mentions (multiple selection question))

As the IFF has been working on several topics regarding the environment the goal was to validate if our chosen path is in line with the floorball community sentiment. A large majority (see below picture) strongly agreed or agreed on five propositions about IFF’s work. The results also act as guiding principles for the targets defined in the recently approved IFF Strategy. This will not only reflect in measures for the floorball community but also for the partners and future partners. Further, the results on questions regarding consumer behavior in events will be helpful tools for the planning work of organising committees. 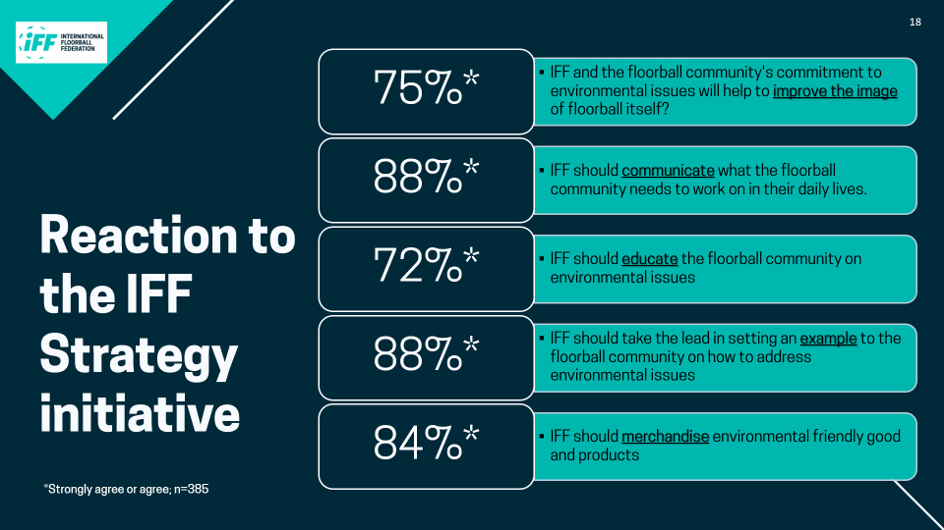 – Having insight about our fan communities views will keep us on the right track in our sustainability work. This also provides our partners evidence on how they can align their own sustainability strategy in the IFF property. I would like to express our gratitude for the great work done by Glion students Yuma Yamada, Salman Alhowaish and Mahmoud Hoteit as well as their mentor Lecturer Anu Laukkala, said Mr. Tero Kalsta, Sales Coordinator at IFF.

IFF would like to thank partner UNIHOC for supplying the draw prize, a SUPERSKIN stick, which was won by Peter Vrba from Slovakia. A further mention of appreciation goes to the national federations who helped to promote the survey.