CDE El Valle took 5th place in the women’s competition, while Nauka-SAFU (RUS) and MKSS FBK Kysucke Nove Mesto (SVK) will meet in the Women’s final. Men’s final will be played between Tsunami Zahorska Bystrica (SVK) and Greåker IBK (NOR). 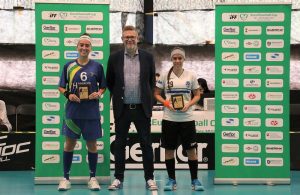 Early Saturday morning and it was a chance for either of  the Spanish teams to earn their first win in the tournament. CDE El Valle had a better start when #6 Paula Arenal Beltran defeated Leganes goalkeeper #15 Hada Sanchez-Pascuala twice. It could have been 3-0 if Arenal Beltran had been able to convert a penalty shot. Leganes responded once and the first period ended 2-1 in favour of El Valle. It took El Valle eight minutes to score another one but Leganes high pressing was causing problems for their opponents and it led to another penalty shot which was saved by the El Valle goalie #1 Patricia Amores Puhl. The siren sounded soon afterwards, and the El Valle team went to the final break with a two goal advantage. Leganes would have thought themselves unlucky that the score was not closer and were confident they could turn things around in the last period. They were determined to get something from the game and they got their reward for their attacking efforts in the 52nd minute when #6 Ester Sanchez Sanchez scored her second goal. El Valle ran out 5-2 winners in the end with a Arenal Beltran bagging a hat-trick, and her team taking 5th place. 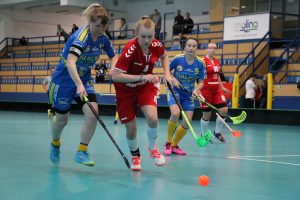 The first women’s semi-final was between Interplastic Olimpia Osowa Gdańsk (POL) and Nauka-SAFU (RUS). Olimpia looked motivated from the very start and the result came just after 4 minutes when #8 Laura Łącka netted for their first goal. Nauka was searching for a reply but the score in the first period was left intact. After the promising opening period the Polish team seemed to run out of power and let Russia settle into the game. #9 Anastasiia Skirdenko made the game level in the 24th minute and Nauka took the lead five minutes later when Russian top-scorer Mariia Kitaeva passed to #99 Anastasiia Bulbash for their second goal. Olimpia had a chance to draw even but #7 Weronika Grądzka was unsuccessful with her penalty shot. The momentum had swung firmly towards the Russians when Skirdenko scored a second and Nauka’s goalkeeper #85 Anna Kolts made some crucial saves. The final score was 4-1 and Nauka-SAFU got their spot in the Women’s final. The best players were Gdansk’s keeper #31 Mariola Szarmach who made 32 saves, and Nauka’s Mariia Kitaeva (1+3). 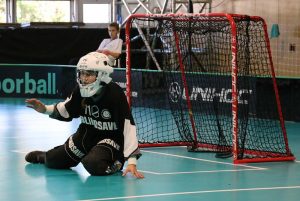 Slovakia’s MKSS FBK Kysucke Nove Mesto and Germany’s UHC Sparkasse Weissenfels met in the second semi-final. Kysucke’s #6 Laura Chupekova had a lightning start, scoring after one minute. The rest of the period was a messy affair with neither team able to get any good rhythm. Not until the last minute did the ball find the net again, this time from a long-shot from out wide by German #5 Pauline Baumgarten with a ball that looped and dipped into the far corner of the goal to send the teams to the break at 1-1.  In the second period both teams still struggled to maintain possession of the ball, neither team being able to hold onto it for more than about 10 seconds before turning it over. At the halfway point, it was Weissenfels who took the lead, and with a rush of penalties late in the period two goals were scored shorthanded, one for each team. The final period started with Kysucke still chasing the Germans and with 10 minutes left the match was tied up at 4-4. Chupekova had been looking dangerous throughout the game and her third goal at 55 minutes finally put her team back in the lead. The Germans played without their goalkeeper for the final minutes but ball control failed them again and Kysucke scored to the empty net to seal the win with 6-4 and secure their spot in the final. Chupekova and #6 Andrea Gerdes were chosen as the best players of the match. 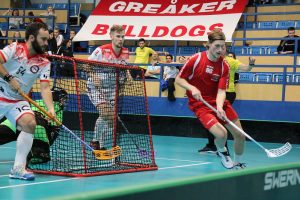 Men’s semi-finals began with Greåker IBK (NOR) against MFBC Leipzig (GER). Leipzig had the early chances, especially when they had a powerplay in the opening minutes, but Greåker was able to hold them out. For a while it still seemed that it would be Leipzig who would get the first goal, but instead, a hit-and-hope backhand shot from Greåker’s #48 Thobias Hjort was the one that found the net. The Norwegians quickly extended their lead and just before the end of the period #16 Sander Fauskanger, son of Norwegian floorball legend Willy Fauskanger, scored a neat powerplay goal to make it 3-0. In stark comparison to the previous game, Greåker’s ability to maintain possession for extended periods of time put the German’s defence under extreme pressure in the 2nd period. The majority of the period was played in Leipzig’s half of the court as Greåker attacked continuously. Despite the dominance of the court position and possession Greåker only managed one goal. When Leipzig did get a chance to attack they were finding it impossible to get past Markus Jelsnes in the Greåker goal. At 187cm he doesn’t leave much empty space to shoot at. The final period was full of fast transitions and physical contact and the scoring was all going Greåker’s way until finally Leipzig’s #44 Mark-Oliver Bothe found the net. They started to play without their goalkeeper and they managed another. And then another with a powerplay. It was fun for the crowd but Greåker were never going to let this game go and finished it off to end 8-3. Best players were #86 Joel Ingesson (Greåker) & #89 Samuli Granlund (Leipzig). 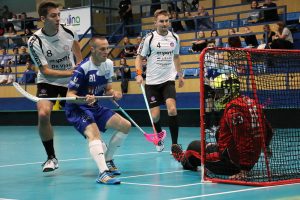 The closing match of the day was played between two Slovak teams, Tsunami Zahorska Bystrica and FBK AS Trencin. Both teams fans didn’t disappoint gathering to watch Slovakian derby on Saturday night. AS Trencin certainly made a bright start, almost opening the scoring in the opening minute of the game! #8 Martin Kubovic was looking for a threat and he tried his luck from distance soon after but #69 Tomas Kafka was on duty. Penalty for #16 Lucien Haraslin and the white team took the lead with 6 minutes gone. Tsunami responded well though and after 33 minutes on the clock the result was 1-1. A few minutes later #68 Peter Dobrovodsky had a chance at the same end and Tsunami was leading the game 2-1. Tsunami were a constant danger during the second period and had a lot of chances to increase their lead further but Trencin keeper was very good today. Trencin had a perfect chance to score with a penalty shoot at 38.35 on the clock but #8 Samuel Davidek missed the chance and the referee’s whistle blew moments later to bring the second period to an end. Third period started well for Tsunami who managed to extend their lead scoring a short-handed goal. They got another chance 10 minutes later when they played 5 against 4 and #9 Marco Machovic was the one who decided the final result in 4-1. Trencin played without their goalkeeper but they didn’t manage to get close Tsunami goal and the referee’s whistle brought the game to an end shortly afterwards. Best players were #14 Leonard Haraslin from Tsunami and #8 Samuel Davidek from Trencin.