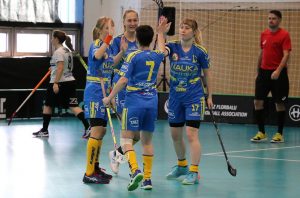 CUF Leganes (ESP) played against Nauka-SAFU (RUS) and with the Russian team going ahead 4-0 in the first period it ended the Spanish hopes in an express mode. It could have been more if not for #15 Hada Sanchez-Pascuala who saved 14 difficult shots in the first period. Leganes run out of power in the second period and were given a tough 8-0 lesson by the Russians who were on the way to the biggest win at the tournament so far. Sanchez-Pascuala made more great saves in the last period, and although the Leganes defence looked much better organised than earlier in the game it was still not enough to stop Nauka. They controlled the match from start to finish and ran away with a 22-0 win. The best players were #17 Anastasiia Dolgoborodova (5+1) and Sanchez-Pascuala whot made a total of 38 saves. The Russian’s second victory put them at the top of Group A and they will meet Interplastic Olimpia Osowa Gdańsk (POL) in the semi-final on Saturday morning at 11:00. Leganes will face their compatriots from El Valle in the match for the 5th place. 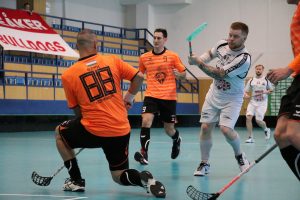 Greåker IBK (NOR) aimed for their second group win after defeating AS Trencin in their opening game while Komarom (HUN) was chasing their first win at the EuroFloorball Cup 2019. Greåker tried hard to break the resistance of the Hungarians for the first 10 minutes of the game with #99 Zoltan Szuri  making some top saves. Once Greåker broke through they stormed to a 5-1 lead and  looked like they had decided the outcome after that moment. #48 Thobias Hjort completed a hat-trick already in the second period and the Norwegians left no doubt that they were aiming for the top place in the tournament, moving to 9-1 after 40 minutes. Komarom set up a promising counter attack and the ball eventually made it’s way to #80 Markus Jelsnes’ goal to open the scoring in the last period. Unfortunately for the Hungarians it was not enough to spark any comeback. Final score was 11-3. Greåker’s #30 William Larsson (0+4) and Komarom’s #29 Janos Kiss (1+0) were the best players. Greaker will face Leipzig in tomorrow’s semi-final while Komarom will play on Sunday for the 5th place against their countrymen, Phoenix Fireball. 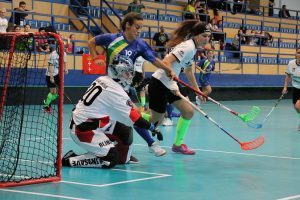 Kysucke Nove Mesto (SVK) completed the line-up for the women’s semi-finals beating CDE El Valle (ESP) 8-0. El Valle knew they needed a substantial win over Kysucke to stand any chance of qualifying to the semi-finals but the Slovakian team was far too strong. Nevertheless, Kysucke had to wait over 8 minutes before Spanish goalkeeper #1 Patricia Amores Puhl conceded and let in 3 goals within only 30 seconds. Kysucke continued the unanswered scoring through the second period to hold a 7-0 lead. El Valle fought hard and had some opportunities but Kysucke sealed the win with a third goal for #6 Laura Chupekova. Best player awards went to the Spanish goalkeeper Amores Puhl who saved 38 shots and the hat-trick scorer Chupekova. 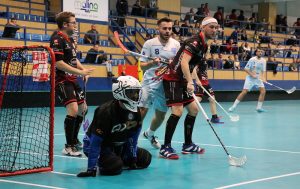 The final group game between MFBC Leipzig (GER) and Tsunami Zahorska Bystrica (SVK) was the deciding match for the men’s semi-finals, and it was a good one. Leipzig came out firing, surprising the Slovaks with an early goal by #91 Ville Pousi followed up by a conversion on a powerplay. With the score already at 2-0 after 5 minutes the Germans continued to dominate the possession. Some scrambling defence and counter-attacks were all that the Slovaks could do to hold off their opponents. When Tsunami got their chance, one of only few in the period, #8 Martin Kubovic was the one who found the net. Leipzig seemed to lose their momentum in the second period and the game tightened up with one goal to each team. Behind by one, Tsunami really applied the pressure to the German defence, but too many of their shots were being well blocked. Finally, some excellent fore-checking by Tsunami’s #3 Marek Valachovic got the turnover and a short pass found Kubovic in front of the goal. 3-3 and it was anyone’s game, but again it was Kubovic who was the key player. His pass from behind the goal was finished off by #68 Peter Dobrovodsky to put Tsunami in the lead for the first time in the match. Leipzig pushed for the last couple of minutes, taking their goalkeeper off at any chance, but they couldn’t force the match to penalty shots. This is one match that got away from them. The win puts Tsunami at the top of the group and into a semi against fellow Slovaks Trencin, while Leipzig will face Greåker. Best players were Pousi and Tsunami’s goalkeeper #72 Martin Vilem.