Third day of EuroFloorball Challenge 2019 saw the Utrecht women’s win their third match, beating Lyon FC 4-0 and earning themselves a place in the Women’s EFCh2019 final. FBC Lemberg won 10-3 against Vikings Roma and have still a chance for the top spot. CUF Leganes maintained their unbeaten status, beating UFC Utrecht 2-0. The closing game was played between Lyon FC and SZPK Komarom who overcame the French team 7-0 and will meet Utrecht in tomorrow’s final. 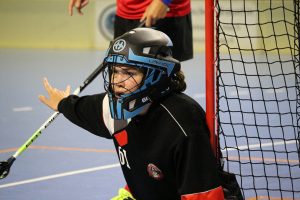 After a clear victory in the first game between Utrecht and Lyon, the Dutch team was the front runner in today’s opening game. They worked hard from the first minute to create an opening on goal but Lyon’s defence was solid and more than 22 minutes passed before Utrecht got on the scoreboard. Lyon going into the break at the last period with only one goal deficit were very unlucky not to get at least a draw for all their efforts. However, Utrecht managed to extend their lead and ended the game with 4-0. In this way Utrecht sealed their place in the Saturday’s final. 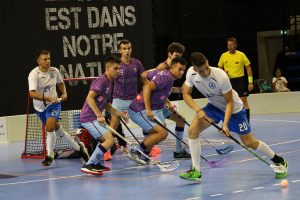 Second match of the day and a chance for the first win in the tournament for both Viking Roma and FBC Lemberg. The Ukrainians started very strong scoring their opening goal in the first minute, but Roma were never far behind and #10 Jacopo Ciotti managed to equalise in the fourth minute. A few more goals from both teams and the first period ended with one goal advantage for Lemberg (3-2). In the second period Lemberg confirmed their strength and doubled the score. The third period was tight but the advantage remained with Lemberg who scored 3 more goals. That was enough to secure their win but the Italians kept pressing and were rewarded with one more goal. Impressive performance from Lemberg’s forward #3 Oleh Rubai who scored hat-trick and was afterwards named player of the match. 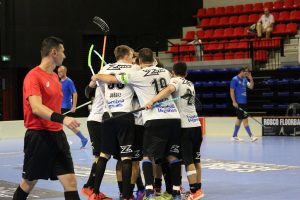 The battle for the top of the men’s group at the end of third day of EuroFloorball Challenge 2019 came down to the match between UFC Utrecht and CUF Leganes. The match was close for the full 45 minutes, with goals only coming in the final period. #83 Antonio Saez scored the first goal for Leganes from a penalty shot. After this the Spanish team found a better rhythm and 3 minutes later #95 Sergio Fuentes increased an advantage to 2-0, which was the final score. Leganes maintained their unbeaten status and leads the table with the 6 points. The best players awards went to #99 Andries Ziani from Utrecht and #83 Antonio Saez from Leganes. 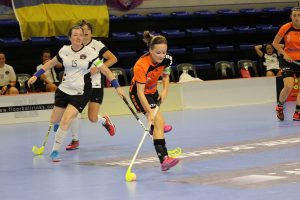 The final match of the day was played between Lyon FC and SZPK Komarom. The Hungarian team was stronger in the first period and after 15 minutes the score was 2-0. Lyon fought well but could not stop Komarom’s striker #77 Nora Lelovics who scored another hat-trick. Komarom kept their first clean sheet in the tournament. This win sets up a fascinating final gainst UFC Utrecht on Saturday, starting at 17:30 at Palais Des Sports in Besançon. The best players award went to Lyon’s goalkeeper #61 Marcelline Perrard and #18 Adél Csákvári from Komarom.