Second day at the Palais de Sports in Besançon was full of close and entertaining games. SZPK Komarom took their first win in EFCh2019 beating Lyon FC 8-3. FBC Lemberg and Utrecht was an extremely close battle, with the happy-end for Utrecht who won 4-3. The game between home team of Besançon and CUF Leganes ended in a 2-4 victory for the away team in another tight contest, and after their 4-4 draw yesterday, SZPK Komarom and UFC Utrecht played another even match, but this time the Dutch took the honours with the score of 6-2. 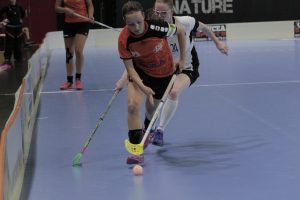 The day began well for the Hungarian Komarom who took the lead in the second minute of the game between French runner-up Lyon FC. There were several end to end actions and 11 goals for the watching fans to enjoy.  Impressive performance from Nora Lelovics #77 who scored 2+3. As in their previous game, Lyon were outplayed but fought to the end and could  be proud of their efforts today and were rewarded with three goals. The final result 8-3 to Komarom. 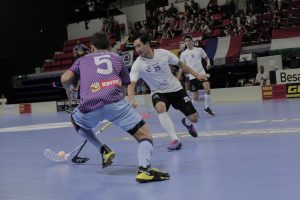 A large number of fans was present at the Palais des Sports arena for the first ever appearance at an IFF event of FBC Lemberg from Ukraine. Two quick goals in the first period from Lemberg increased their confidence and allowed them to lead the game for the whole period. Utrecht responded well in in the twelfth minute with a distance shot from #50 Mikko Niiva. The game was close and hard from both teams. Utrecht secured the win after an impressive comeback but Lemberg pushed them all the way and were unlucky to lose in the end. Final score 4-3 for the Dutch. 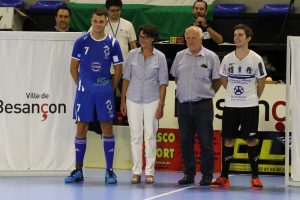 Besançon fans didn’t disappoint, gathering to watch their team competing against Spanish Leganes. Leganes managed to hit the net three times in the first period. It could have been more than three if not for the great work of the local goalkeeper #99 Valentin Helot-Gerard. Second period and #12 Arnaud Colin to #7 Thomas Courtet who scored his first goal for Les Dragons in EFCh2019. Five minutes later and again #7 Thomas Courtet gave the Spanish goalkeeper no chance scoring a beautiful short-handed goal. Home team of Besançon continued to press throughout the last period but Leganes’ #83 Antonio Saez sealed the victory for Leganes. Final score 4-2 for Leganes. 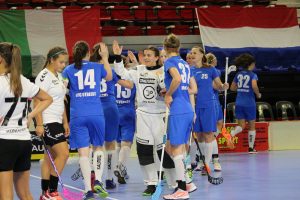 The closing match of the day was played between SZPK Komarom and UFC Utrecht. Just like their first match, it was a hard-fought game where both teams went head to head until the last whistle. #77 Nora Lelovics was causing problems for Utrecht throughout the second period and she almost took a 2nd hat-trick in EFCh2019. Utrecht took the advantage of the missed opportunities from Komarom and #38 Nina van Mastrigt decided the score for 4-2 before the last period. In the final period the fans saw five more goals. Final numbers were 7-4 for UFC Utrecht. The best players of the match were #23 Nora Susztak from Komarom and #38 Nina van Mastrigt from Utrecht. It looks likely that Komarom and Utrecht will meet in the women’s final on Saturday and, based on their first two meetings, it is sure to be a great game.