The opening day of 2019 EuroFloorball Challenge in Besançon, France, saw the women’s teams from Utrecht (NED) and Komarom (HUN) finishing in a 4-4 draw, while the first game in the men’s tournament began well for CUF Leganes (ESP) who won over Viking Roma (ITA) 7-0. The spectators were most interested in the third game when the local team Les Dragons Besançon (FRA) faced the Utrecht men, but the visitors took the honours 3-0. The last match of the day was between Utrecht women (NED) and Lyon (FRA) where the Dutch won with an impressive result 14-1. 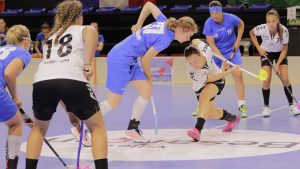 The first match of the tournament was wide open in the first period. A number of solid saves in the second part of the match from the Hungarian goalkeeper #11 Fanni Marton allowed the Dutch team to hit the net only 3 times. SZPK Komarom started to up their tempo as they knew they had to get back into the game as quickly as possible. The Hungarian team was able to score 4 goals in less than 3 minutes and making a nervous end for the Dutch. A minute before the last whistle, Fabienne Kollau (Utrecht) scored her third goal deciding the final result 4-4. 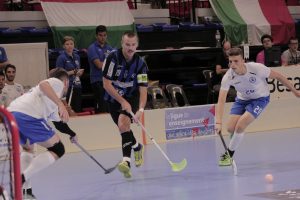 The men’s tournament started with the battle between CUF Leganes and Viking Roma. The first period was full of shots and saves from both sides. A goal was coming though and it was the Spanish team who opened the bag. From one quality goal to another, they took over the lead in the second period not letting up the scoring until the last whistle. The final score was 7-0 for Leganes. 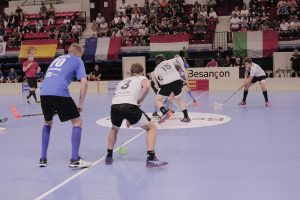 Besançon supporters present for the 3rd match of the EuroFloorball Challenge were able to see their team playing an international match for the first time. Very well organised defense with some great offensive actions from both teams were seen. Loud “Allez Besançon” was heard from the audience but an opening goal was scored in third period by Utrecht player #50 Mikko Niiva, followed by another two goals for the away team. 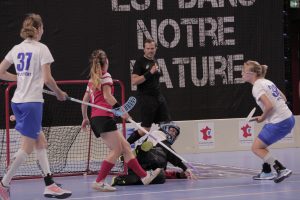 The last game of the day was the second for the women’s team from Utrecht. The Dutch faced the French runners-up Lyon FC. Utrecht not showing a sign of tiredness and with full confidence opened the score in the fourth minute. Two players completed a hat-trick – #38 Nina van Mastrigt and #37 Kiki Spoelstra. Despite the big score, Lyon played until the end and were rewarded with a goal scored by #15 Florence Thevenet.