Phoenix from Hungary is the winner of the men´s EuroFloorball Challenge 2018, congratulations.

Phoenix played against El Valle, which won yesterday against another Spanish team, Escorial in the extra time. Today, Phoenix had a strong start, but El Valle fought well. 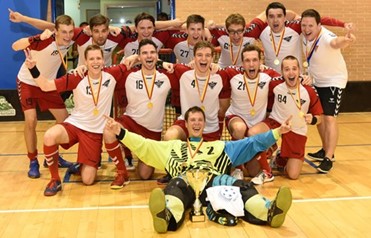 Phoenix took already 6-1 by the half way of the game, but then El Valle found some unused energy. After five minutes was played in the third period, the score was 6-5 for Phoenix and El Valle was really playing hard at that time. Closer than that El Valle didn´t get, when Phoenix took the initiative again and scored four more goals in less than three minutes and won the game 10-5.

By winning against Escorial in the second game of the day, Utrecht took the third place in the tournament. It seemed that Escorial had lost their will to win after the somewhat bitter loss yesterday during the over time against El Valle.

London Sharks won easily against Milano and took the 5th place, when IFK Paris was the 6th and Milano the 7th in the tournament.

It’s been hectic five days with five games per day during the first three days and the temperature outside and especially inside the arena has been a challenge to the players and to the teams. The tournament however was a good one and we will hopefully continue with the EF Challenge next year; Madrid, El Valle, over and out.

Check all the results, standings and personal statistics from the IFF event page.
The recorded matches can be watched on IFF YouTube channel and a lot of pictures can be found in the IFF Flickr.

Men's national championships are back and running in Slovenia