Great Britain got their first victory as they defeated Austria and Norway became the group winners as they won the tight match against Denmark. 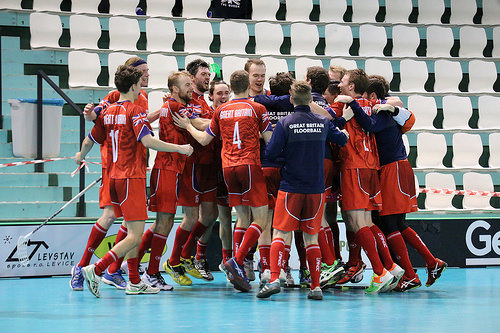 Austria were seemed as the favourite of the match as they had played a convincing tournament despite their lost against Spain. However, with six and a half minutes played, it was Great Britain who scored the opening goal as Austrian defender lost the ball. Only few minutes later Austrian defence repeated their mistake and once again Great Britain seized the opportunity. One fierce powerplay shot later, Great Britain were in a 3-0 lead.

Austria had plenty of scoring chances already in the first period and even a few goal posts. They continued to have ball control in the second period, but were once again struggling. Great Britain had improved during the tournament and were now playing more disciplined than before. Also their goalkeeper #93 Matthew Sellars was playing confident. However, Austria finally scored when the side post of the goal was left open. But only a short while later, Great Britain succeeded on counter attack. After the second period the score was 5-2.

In the third period Austria were still desperately trying to find the net, but once again it was Great Britain who used their scoring chances. After six minutes Great Britain had increased their lead to 7-2. Within the last three minutes, Austria found the net twice, but it wasn’t enough. Great Britain celebrated their first victory of the tournament with numbers 7-4. 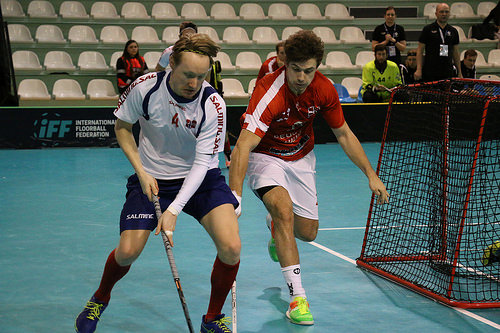 Neither Denmark nor Norway had lost a single match and this Nordic battle would be a tight one. With only one and a half minutes played, Norway’s fast passes from a free hit found the net. Only a short while later Denmark scored their opening goal, but 30 second later the Norwegian goal song is played again. Soon the Norwegians increased their lead to 3-1 and seemed to be one step ahead of Denmark. But before the period had ended, Denmark had made a comeback and the score was even.

In the second period Denmark turned the tables around as they took the lead. But after being rewarded with two powerplays and playing 5 vs 3, Norway made the score 4-4. Denmark had seemed to stepped up their game after a bit shaky start, but at the very end of the period a bad pass at their own end lead to Norway’s fifth goal as #4 Sindre Bjerknes skilfully put the ball behind Danish goalie.

The score went back and forth in the third period. One moment Denmark were on the lead, but then Norway regained control and evened the score with a beautiful sweeper shot. The Danish goalkeeper #31 Emil Brixage made Norway work for their goals, but at 54:33 the fast Norwegian passes lead to 7-6 goal and Norway takes the lead. At the end of the period Denmark is rewarded with a powerplay and plays 6 vs 4. Many dangerous scoring chances are seen but either Denmark fails or the Norwegians block them. Norway wins the match and the EUR 4 Group.