Germany defeated France with the needed fourteen goal difference and thus qualified for the final round. Slovakia put up a fight, but it wasn´t enough to stop Sweden´s dominance. 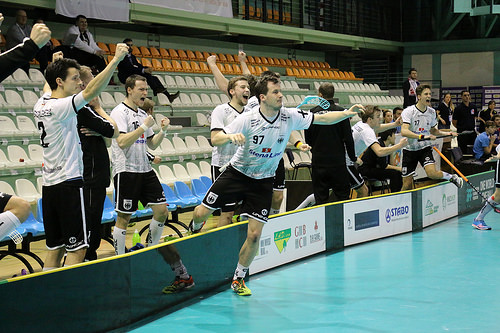 Germany gets the needed score difference and qualifies for WFC Prague

Germany needed to win against France by at least 14 goals in order to qualify for the final round. The match started well for Germany as with less than a minute played they scored their first goal as the ball slipped into the net right between the French goalkeeper’s legs. However, the next goal was scored by France as they succeeded on a counter attack, and with 11 minutes played France took a 2-1 lead. Germany stepped up their game and finally started finding the net. After the first period they were in a solid 5-2 lead.

The second period was no different from the first one. Germany were in control and France were relying on counter attacks. Germany had plenty of dangerous scoring chances, but they missed several of them. Despite of this they managed to score four goals and increased their lead to 9-2.

The third period would decide Germany’s destiny. They needed 7 more goals to qualify for WFC Prague. At 52:17 Germany were already in a 14-2 lead and things were looking up. However, the next goal was scored by France. With three minutes to go, Germany still needed two more goals and took away their goalkeeper. The German shots were on point and with a bit more than a minute left they scored their 17th goal which was celebrated loudly. Germany won the match 17-3 and made their way to the final round. 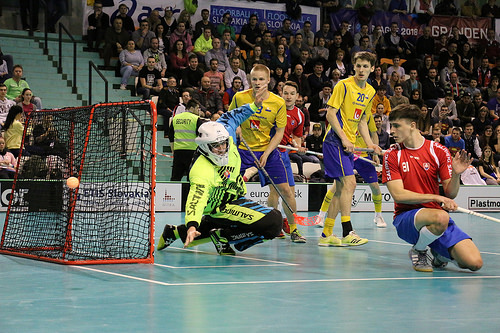 The home team Slovakia were playing against Sweden in the last Men’s WFCQ 2018 match in Nitra. Again a large crowd of 1862 spectators had gathered to witness as the home team tried to challenge the floorball giant Sweden who had dominated throughout the tournament. Sweden took control from the start and scored their first goal with three minutes played. Sweden’s goal scoring wasn’t on point whereas Slovakia’s defence was doing a good job. With a few minutes left, Sweden took 2-0 lead, but only twenty seconds later the home team decreased the score to 1-2.

Sweden stepped up their game in the second period and found the net more efficiently. Especially #27 Robin NIlsberth’s accuracy was on point as he scored three goals during the second period. The home crowd also got something to cheer about as #41 Peter Nehila decreased the score to 3-9 right at the end of the period.

In the third period Slovakia were able to decrease the score to 4-9 on powerplay. The Slovak goalie #1 Rudolf Turiak kept making Sweden’s scoring difficult, but even he couldn’t stop the fierce shot by Sweden’s #6 Casper Backby. In the end Sweden won the match 4-11 and at the same time won EUR 4.