Thailand is the first ever AOFC Cup Champion

Thailand were unstoppable at the first AOFC Cup in Bangkok.

The AOFC Cup was played in Bangkok, Thailand 1st – 6th July 2017. The AOFC Cup replaced the former international tournament, the Asia Pacific Floorball Championships. Eight men´s teams participated including China who made their international debut in men and India who returned to international competition after a long break.

The final became a clash between Singapore and the host country Thailand. Both teams had been unbeaten so far and also had an impressive goal difference. When the two teams met in the WFC in December, Thailand were better by six goals.

Thailand set the tone early on, opening the scoring at 2:07. The strong start earned them the second goal after eight minutes of play, before Singapore got one back at 14:09. It didn´t take too long for Thailand to answer, as Sattaya Phoosinoi scored to make it 3-1 only 67 seconds after.

Singapore started the second period brightly, when Tristan See completed a nice combination from the assist of Jian Hong Lim, narrowing the gap to only one goal again. Everybody at the arena was now witnessing a thriller, which was definitely fulfilling the expectations as a crown to the successful event.

Big players tend to step up when their team need it the most, and it was exactly the case for Thailand, as Pawat Thaidit picked up a pass from Phoosinoi in front of the Singapore goal after a good pressure and a loose ball as a consequence to it. The tournament´s top scorer took the ball, kept his calm to deek the goalie out of his position, and shot into the back of the net – completing the moment with a passionate celebration in front of the joyful home crowd.

Thailand was again up by two goals, but Singapore refused to give up. Tristan See put on his leader boots and scored his second goal to make it 4-3. Pressure was again switched to the Thailand side of the rink. But again, it was Thaidit who wanted to show that he is up for a scoring competition with See. Thaidit got a pass to the right wing from Alexander Rinefalk in a short counter attack, but missed the net. Rinefalk got the ball again on the left side of the rink and picked up a one-time pass to reach Thaidit again from the right wing and this time the sniper didn´t miss. He shot a powerful one-timer past the Singapore goalie to stop the digitals at 35:36, giving his team a 5-3 lead with the strike that ended up as the game-winning goal of the final.

Soon after the third period was kicked off, the hero of Thailand completed his hattrick with his 11th goal of the tournament, making it 6-3 for his country. Singapore kept fighting, but Thailand was able to keep their defence together. Finally, at 48:13, Santipong Sukkasem extended Thailand´s lead already to four goals, and it became even more of an uphill battle for Singapore. During the final 10 both teams scored once but there was no stopping the Thailand championship train which ended up in lifting the first ever AOFC Cup trophy with the scoreline 8-4 over Singapore.

At the bronze match, Korea won against Indonesia 4-2. 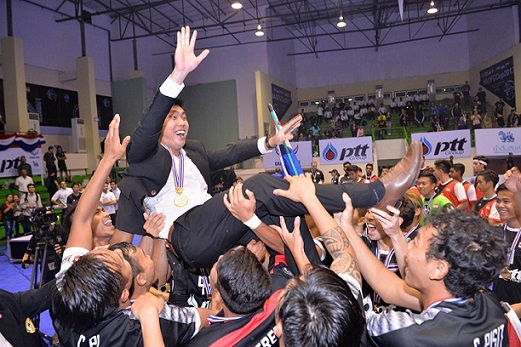 Check out all the results here.

The AOFC Office was also opened in Bangkok during the AOFC Cup. You can read about it here.