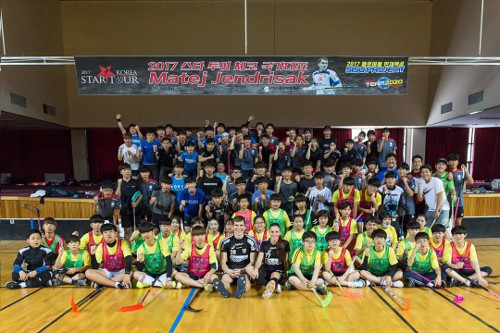 Floorball Star Tour was held in Korea during June. Two floorball stars from Linköping IBK, Matej Jendrisak and Radka Topicova took part in the tour which was organised by the Korean Floorball Federation. The tour is part of the SISU project:
– We have a special team called “Team 2020” which consists of the future national team players of Korea. We have 100 players who are 11-18 years old and all very talented, says Mr. Hwang Joo Kim the Secretary General of Korean Floorball Federation.

The Korean development programme was modified from the Finnish system:
– Our goal is to develop this group in the best way possible and we actually took bits from the Finnish National Team system and modified it to a Korean version. This is why we call it “Sisu”, it’s a Finnish word that means grit and it’s exactly what we need in order to be successful in this long-term project, states Kim.

The Star Tour is one of the key items in the SISU project and the aim is to organise it annually. Jendrisak and Topicova are the first floorball stars to visit Korea:
– My Swedish friends introduced me to Matej and Radka. We did a lot of things together within a short time. They travelled around 2000 km within a week so it was hard work, but they really helped the Korean floorball and I want to give them a big thank you for that.

The main aim of the Star Tour is to motivate the players:
– It’s great for the kids to meet star players, it truly gives them a motivation boost. Another theme was coaching and a little bit like a Korean tour. We wanted the star players to not only work, but also to enjoy Korea. I’m hoping both Matej and Radka have great memories. The spicy food might have been one of the biggest troubles, says Kim laughingly and concludes:
– I hope that many other developing floorball countries will also do this. Star players can attract many people and it’s good for development of the sport. Coaching is just one of the things to do, but adding the star players makes a boom!

Top transfer of the week – Patrycja Bernacka and Andrea Sidlova