Japan are the 2017 AOFC women´s champions after defeating Australia 4-0. Today´s matches were all to decide the final placings for the AOFC qualifications, and Malaysia defeated China 13-1 to finish 7th, while Korea took 5th place with a 3-2 win over New Zealand. For the Bronze, Singapore held off the strong Thai team 6-3. 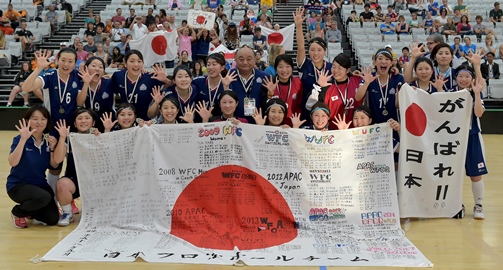 It´s pleasing to see the Malaysian women back in IFF competitions after an absence of 10 years. The Malaysian Floorball Association has done a lot of work to rebuild the organisation and the team performed well, gaining some great experience to take back with them. China, being the newest IFF member, were on a steep learning curve and they had some tough losses, but they also showed some visible improvement as the week progressed. We look forward to seeing them in many future events.

Korea, still feeling the disappointment of missing out on qualifying for the WFC final round, faced the local team which have performed well above their past level. New Zealand opened the scoring with a penalty shot conversion but Korea answered back soon after. The same in the second period with New Zealand scoring first and then Korea getting back even. This time it was Korea´s best player, Yejin Shim, putting the ball in the net while playing short-handed.  Another a few minutes later gave Korea the lead for the first time, and 3-2 turned out to be the final score of the match, despite a valiant effort by the Kiwis to get back even.

5th & 6th is a fair reflection of the team´s performances and level of play, but New Zealand´s result was significantly helped by the amazing effort of their #1 goalkeeper, Maria Hegarty. She may not be the best goalkeeper in the tournament, but she has been the one who has had the most influence on her team´s results. 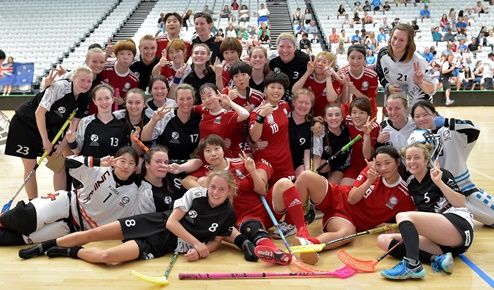 Every match involving Thailand this week has been exciting and today´s Bronze match against Singapore didn´t disappoint. Singapore surprised the Thais with an early goal but were not able to capitalise on it and the game to and froed. Thailand play an aggressive, high forechecking game, not allowing much space for their opponents to get out of their own area, while in defence they scramble well and work hard at blocking shots with bodies and feet. The Singaporeans attacked strongly but couldn´t find space to get clear shots through to the goal. Their defence was perhaps more organised but struggled at times to stop the determined Thai forwards from forcing the goalkeeper to work quite hard.

There were quite a lot of penalties in this physical encounter but only their fourth chance with the extra player did Thailand finally find the net. This inability to capitalise on these situations, especially a Singapore 5 minute penalty, proved to be costly for them.

The final period started with the now familiar high forechecking from the Thais, forcing a turnover and goal which tied the game up. A mistake in defence from Thailand a few minutes later, with a pass to a substituting player, presented an easy goal for Singapore to be back in the lead. But Thailand hit back immediately, with Singapore just not able to get control of the game. Singapore out in front again with 10mins left to play meant for a hectic, exciting last minutes. 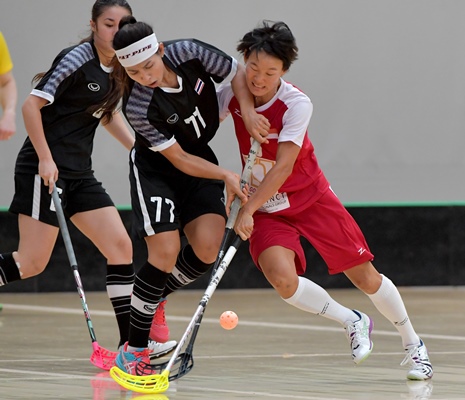 Thailand pressed the defence, fighting to get the ball to the goal. Equally, Singapore fought back, this time their desperation in front of their own goal paying off. With the Thai goalkeeper off the court and back on again several times, and with Singapore attacking finally they scored. Time had run out for the Thais, but what an effort, from both teams. 6-3 the final score and we will so look forward to seeing both of these teams in Slovakia in December. Thailand, in particular, are going to cause a few surprises.

The final match between Australia and Japan was a tough one, but the Japanese showed an all-round better level of play to win the gold medals. With dangerous forwards with their powerful shots, to their experienced and calm defenders, to their unbeatable goalkeeper and captain, Chika Sato, this Japanese team was very worthy of the AOFC title. The Australians played a strong match and held Japan off for much of the game, especially thanks to the great work from Sarah Moulton in goals, but without any real strike power up front they didn´t have the depth of their opponents.

The first period and nearly all of the second went without anybody being able to break the deadlock, but in the final minutes of the second period the Japanese were piling on the pressure in the Australian defensive zone. Sometimes in Floorball you just know that a goal is coming….and it did with a minute left in the period. 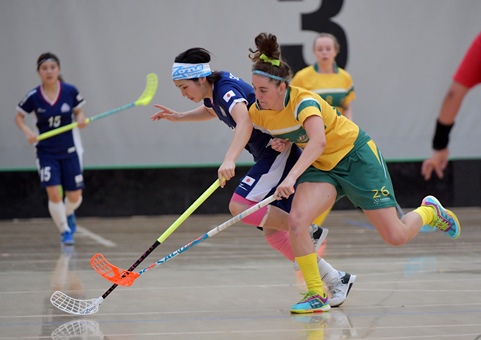 In the last period the Australians seemed to be able to challenge the Japanese defenders a little more finding space through the centre of the court, but the Japanese forced them wide and away from good shooting channels. A powerplay goal to Japan and then a third goal just a few minutes later finished off the game for the Japanese. The Aussies tried hard but the Japanese were never going to let this win get away from them.

The Japanese have not looked as strong as this for many years. They are technically very good with their individual skills and they have physically outplayed many teams, something that Japanese teams of the past were never able to do. All of the four AOFC teams that have qualified for the Women´s WFC 2017 – Japan, Australia, Singapore & Thailand – are amongst some of the strongest to come out of this region in many years and could perhaps cause a few surprises in Slovakia in December.

Many great photos from all of the matches can be found at FLICKR. Match replays and player interviews can be seen on IFF YouTube (some games are still to be uploaded due to our internet problems).

For all the standings and player statistics visit the AOFC Event Page.

Both World Floorball Championships to take place in 2021

Rules of the Game 2022 Edition