After the second day´s play many of the groups seem no closer to being decided. The Men´s A & Women´s A group positions will all come down to the last group matches. In Men´s B, Slovakia are clearly the strongest team, but the position for second could be a three-way tie between Japan, Korea & Spain, which would then be decided on goal differences. The most decisive victory of today went to the Czech women who defeated Poland and secured first spot in the Women´s B group and a place in the semi-finals.

The game between the Czech & Polish women was one of the most important of the day as it was sure that the winner of this match would get a spot in the semi-finals. The Polish started strongly and converted an early penalty shot to take the lead. Their defence was strong the whole period and they worked well to stop the shots getting through, limiting the Czech´s goal scoring chances. They got a second goal near the end of the period and were surprise 2-0 leaders at the first break.

For the first half the second period it was the same story. Czech was able to break through once but the Polish were looking confident and quickly converted a powerplay chance to again extend their lead. Come the half-way point of the game, it all changed. The Czech coaches had clearly figured out a new game plan and once they started finding the holes in the defence the goals just kept coming. Their experienced players led the way and a 7-1 period virtually ended the game. Final score was 10-4 and Tereza Urbankova was the best of the Czechs, finishing with 2+4.

Both the Spanish men´s & women´s teams were in action, the women against Japan, while the men took on neighbours & hosts, Portugal. The Japanese women took a 8-4 victory over Spain after a quite tight match. Spain stayed in the match throughout but the third goal of Japanese forward, Eriko Chiba, which gave a four-goal lead was decisive in the outcome of the match. During the game, the Japanese were able to score six goals on counter attacks, breaking away from the Spanish defence leaving the goalkeeper alone and with few chances to stop the fast, accurate finishing of the Japanese forwards.

The Spanish men had a hard time against Portugal. Having been a key part of helping to develop floorball in Portugal, the Spanish were certainly expecting to be stronger than their much less-experienced opposition, however, they have obviously taught them well, as it was the Portuguese who managed some good periods of controlling the ball and attacking play and were leading 2-1 at the end of the second period. Eventually the Spanish started to find their own game but only in the last 10 minutes were they able to dominate and get the win. 5-2 gave them two points but they were disappointed with their game. An injury to their only goalkeeper will also make the rest of the tournament difficult for them.

Switzerland faced Sweden in men´s & women´s and Sweden took the points in both games. The Swedish women won 6-2, however, the game was much tighter than the scoreline may suggest. The Swiss were not afraid to attack and were unlucky to not put a few more goals on the scoreboard, especially in the first period. The Swedish men´s team which, in comparison to the other top 3 countries, has players who are rather inexperienced in international matches, had a tough time against the Swiss men. Like the women, the Swiss men were keen to attack, however, the quick turning of the game by the Swedes was too strong and they went to a 2-0 lead. The Swiss came back in the second period and even into the lead in the last period, but the Swedish worked hard to find the open shots and scored the winning goal with just 9 seconds left on the clock. A goal to the empty net in the final seconds made it 6-4 for Sweden.

The Finland v Czech Republic men´s game was the match of the day, and like the Swiss-Swedish game it was decided only in the final moments. It was a very close match, but very exciting. The play was fast and both teams counter-attacked with great skill, passing the ball wide and long, creating many shooting opportunities. The Czechs, in particular, had very tight defence in front of their goal, stopping many shots from the Finns in this area and forcing them to look for shots from wide on the court. Finland held a two goal lead, but penalties to both teams towards the end of the final period saw 4v4 play and it was the Czechs who scored to come back to within one. With the teams back at full strength it was the Czechs who re-organised their play the quickest and within seconds had scored the equaliser. The score was 4-4 and the Czechs, who really needed two points after their narrow defeat to Switzerland yesterday, attacked at every opportunity, but the score remained equal to the final buzzer. 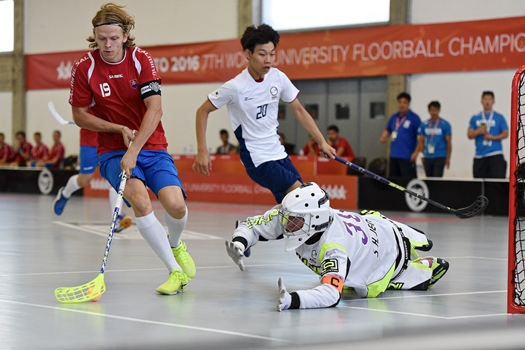 In other matches, Slovakia continued their goal-scoring blitz, defeating Korea 22-0. They will play a quarter-final match against one of the Group A teams and this will be their first real challenge of the tournament. Their defence has not been stretched so it will be a real change in game plan and game pace when they face tougher opposition. It will be interesting to see how they manage. In the final game of the day, Japan comfortably beat Portugal 11-3. Portugal have shown great improvement in every game and again showed some new ability to control the play and manage their attacking play. Their defensive players also showed some good skills to move the ball away from their own area, however, the fast pace of the Japanese forwards was at most times, too much for them to handle. A good high-scoring game for Japan as they hope to secure a quarter-final spot, which could come down to being decided on goal differences.