First National Floorball Championship for U8, U10 and U12 played in Hangzhou, China

The floorball community in China keeps growing. The first ever floorball championships for juniors U8, U10 and U12 was played in Hangzhou. The two day competition was a big success with over 200 athletes from 14 teams from Shanghai, Jiangsu and Zhejiang participating in the competition.

The first China National Floorball Championship for U-series (for the East China Zone) was successfully held in Hangzhou, Zhejiang Province on May 29 and May 30, 2021. The event was supported by several stakeholders and national authorities.

There was a lot of skills, joy, fun and teamwork seen by all the participating players, coaches, referees and officials. It was the team of Shanghai Pinghe Bilingual School who was winning several titles. The school won all the championship in the age groups of U8, U10 and U12. Furthermore, in each age category there was an election of best player award and the following pupils were receiving those: Zhu Li Jiaqian, Alan Xia, Hu Peiran, Zhang Zhining, An Haorui and Cheng Guo. Also the coaches and the referees were awarded with their respective trophys: Zhang Wenyu and Matt won the best coach award as well as He Xiaolong and Shang Liangyu won the best referee award. 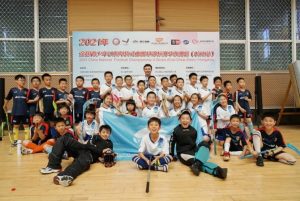 This competition was the first out of five national competitions for youth. There will be the National Finals from 10th to 16th August this year in Yudu, Jiangxi Province.

— The successful holding of these competitions further promote the popularity of floorball on campus and it made a good start for the National Competition, said Mr. Yuan Yong, Vice President of China Floorball Union.

The event was sponsored by General Administration of Sport of China (which also manages Handball, Hockey, Baseball and Softball Administrative centre), the China Hockey Association and the China School Sports Federation. The big event was organised by Sport Bureau of Zhejiang Province and Hangzhou Chuying Sports planning Co. Furthermore, Zhejiang Disabled Cultural and Sports Guidance Centre were co-sponsoring this championship.