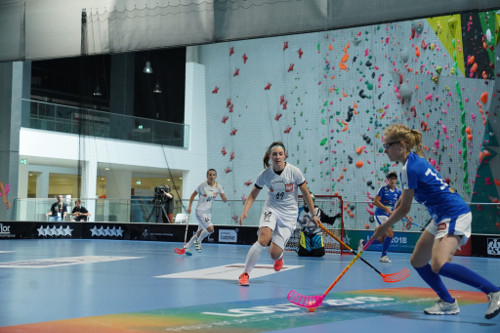 On the day that would decide final group standings, Japanese men’s team started the game determined to make a stand against the Czech, playing very offensively at the beginning, unfortunately without scoring. The Czech took the lead soon, which the Japanese failed to tie with a penalty shot saved by Czech goalkeeper’s right leg. The rest of the game was played almost entirely in the Japanese part of the rink. Less than 4 minutes before the end of the game, Takizawa managed to score the only goal for Japan, followed by an explosion of ovation from his teammates. The game was eventually concluded  22 – 1.

At the same time, the bravely defending Singapore men’s team was not able to stop their opponents, the Swiss,  who, cleverly playing both offence and defence, managed to score many times with complex actions. This way Switzerland completed the group phase, winning the last game 18 – 0.

After 2 men’s games, women’s meetings followed. At Sports Bay, the Finnish defeated the host team, ruthlessly exploiting all of Poland’s shortcomings. Poor defence under the goal and opportunities not taken from the Polish were evident during the whole game. This led to the final result 21 – 1 for Finland.

A much more thrilling, balanced game between Sweden and Czech – women could be seen at City Sports Hall. Sweden started well, scoring immediately in the first minute. By the end of the first period, Sweden was leading 2 – 0. However, in the second period the Czech came back incredibly strong, quickly turning the score to 4 – 2, taking advantage of Finland’s forced errors. Despite great effort of the Swedish team, thanks to Czech goalkeeper’s efficiency, the Czech scored 3 more times, losing no more goals. The game was concluded 7 – 2 for the Czech.

The last game of the day, between Poland and Slovakia – men, turned out to be a very even and engaging match with fast play and lots of body contact. Both teams made many attempts on each other’s goals, but it was the Slovakian team, scoring 4 goals with excellent power- as well as short-handed play, who had the upper hand in the end. The match was concluded 6 – 2. 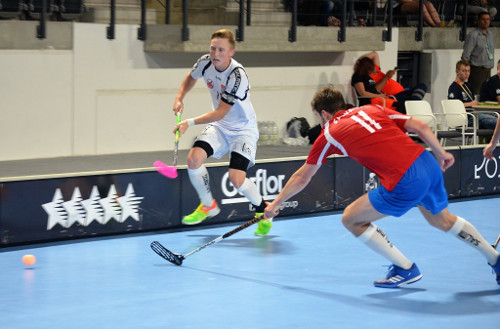 Tomas Sojka and Kamil Sojka (CZE Referees)
The level of the tournament is good, we’re satisfied. It’s a shame that the Swedish men team isn’t here, because they are also a good team. For now, we haven’t seen many matches yet, but Czech Republic against Finland and Switzerland against Slovakia were very interesting. From a referee’s point of view, the matches played so far are quite fair, not difficult to judge. No violent actions, no big problems. The organization is perfect as well, all organizers and volunteers are doing a great job. Sports Bay is a very nice venue, a new and modern one. City Sports Hall is a little bit older but good enough. We look forward to the rest of the competition.

Nicolas Jordan (SUI)
We weren´t really satisfied after yesterday´s game, we knew we could do better in the offence. Today our confidence increased after scoring few goals and that is why we could play easily. Also our defence was very nice and that is why we are happy with the result. Now our goal is to win the tournament. Tomorrow in semifinal we have to play a good game.

Nikola Příleská (CZE)
The key for our successful comeback was that we concentrated all along and didn´t give up after we weren´t leading. It was much easier for me to prepare myself against a strong team like Sweden and therefore I could give a better performance as a goalkeeper. We need to continue what we were playing in our group matches. We should never give up, even though we are going to play against Poland, a not so favorized team.

Hanna Maria Garman (SWE)
I don´t know what happened to our team after the first part. We fought hard and had many chances, but they had a very good goalkeeper. We have a game tomorrow, if we do our best, we can win every game that´s left. We hope that tomorrow will be our day.