Due to the current COVID-19 situation and the following suspension of the floorball championship and field activities, the Italian Floorball Federation decided to react to this physical stop and started running with their minds instead. The first online referee education course was organised last weekend.

– We managed to organise a course for 11 floorball referees all over Italy by using a conference call platform as a virtual classroom. The session ran on Microsoft Teams, but there are many other tools similar that are useful for this goal. The software gave the teacher the possibility to act like a teacher in a real classroom, by sharing the screen with the course participants to show different situations using interactive whiteboards, videos and rulebook, says Roland De Conno Pobitzer from the Italian Floorball Federation referee committee.

The main subjects were the aspects of refereeing a game that are not written in any rulebook but are key to minimise the human errors and get better in making the right decisions in a split second.

In particular the course put the focus on how a referee should:

The course was held in two sessions of 90 minutes and in the last part video analysis was used to show and comment real situations.

– This was a first pilot session and we plan to hold further sessions in order to reach all Italian referees. Furthermore there will be a similar pilot session on floorball tactics for coaches during the upcoming weekend. Nothing can stop floorball!  Roland De Conno Pobitzer concludes. 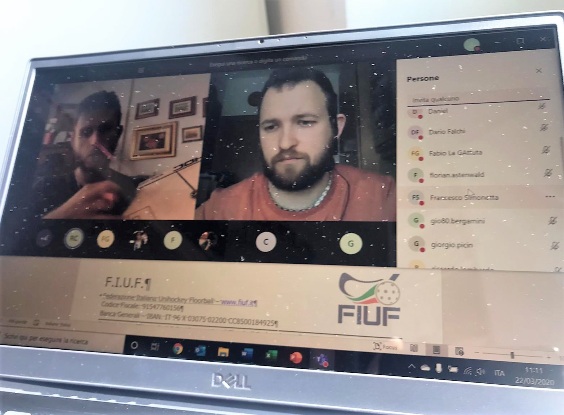