There were a lot of Czech fans cheering in the University Arena, but the home team could only keep up with the Swedes for one period when Sweden played themselves to the Final with a clear 12-3 victory. 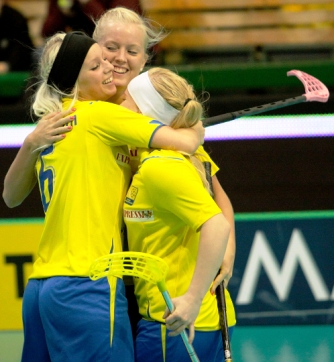 The defender Emelie Wibron  scored the first goal of the match only after 27 seconds  with a long distance shot.

The Czechs were able to reduce the lead with Adela Bocanova  power play goal but it was Sweden that took control of the match. The Czech tactic relied more on fast counter attacks heading straight towards the  goal whereas Sweden created  their chances with accurate passing play.

The 2nd Swedish goal was also a long distance shot by a defender, this time Jenny Gustafsson and then the  Lindgren twins, Hanna and  Frida, increased the Swedish lead to 3-1 before the intermission.

Czech Republic did not have much to say in the 2nd period when Sweden got their game going. Cassandra Edberg and Therese Karlsson both scored two goals in the second period and the score was already 9-2 after 40 minutes.

Sweden made their way to the final with a convincing performance and will meet the winner of the 2nd semi-final, Switzerland or Finland, in the Final. The bronze match will be played at 12:00 CET.

Sweden´s star center, Anna Wijk, (pictured) collected 1+3 in the match and was happy after the match.
– It feels really good, it will be great to play in the Final tomorrow. The key to our victory was good game plan, which everyone was willing to follow. It is our strength that we have many good players who can decide matches.

Wijk´s and Therese Karlsson´s co-operation on the field has produced many goals in the tournament.
– It is easy to play together with Therese. She is a really skillful goalscorer who finds the good places to score while I like more passing and try to serve her the ball to open places.

Tomorrow afternoon Sweden and Wijk will play in the WFC Final, but the opponent is still open.
– I would like to meet Finland, we want the revenge from the group match which ended in a draw. We will play together as a team and will do everything to win tomorrow!

Finland to the WFC Final after a tight battle

Finland won the intensive Semi-final against Switzerland with the final score 4-3. Finland took the lead in the first period and was able to keep the lead all the way to the end. In the 4th U19 WFC Final Finland will meet Sweden tomorrow at 15:00 CET and it will be a re-match from the group match which ended in draw.

The Semi-final between Switzerland and Finland got a rocket start as both teams scored already during the first minute. The opening goal was scored luckily by the defender Jenni Tikkanen with a long distance shot. Switzerland did not mind the strong start by the Finns but answered directly. The Swiss star player Corin Rüttimann scored two goals with accurate shots during the first five minutes and took the lead to Switzerland.

The first period was intensive and there was lot of speed in the game. Both teams were able to create good scoring chances from counter-attacks. One of these resulted as a goal when Laura Hietamäki (pictured) scored the equalizer. In the last minute Finland took 3-2 lead when a nicely executed corner hit-in resulted in a goal.

The tempo of the match  dropped in the second period, partly due to penalties. Both teams had power play opportunities, but no power play goals were seen. The only goal of the period was shot by Mirja Hietamäki after a successful free-hit.

Finland dominated the first ten minutes of the third period, but did not get into the best scoring sectors. Switzerland reduced the score to 4-3 with a power play goal shot by Nina Maria Bärtschi to an open Finnish goal. After this Switzerland took the ball possession and pressed hard to the Finnish defence. Laura Loisa in the Finnish was however able to save all shots and Finland took the spot in the Final.

The Finnish head coach Harry Virtanen was very happy that his team could win the match despite so many changes in the line-ups:

– Now it feels great especially when so many of our players were sick or injured. I almost felt like crying when so many players informed that they are sick and the line-ups where rearranged many times during the day. We got one “real” center to the field, but the subsitutes and the team did a great job, Harry Virtanen said in Salibandyliiga´s interview.