The new season to be started in Austria this weekend.

The IFL Bundesliga and the Women’s Bundesliga kick off the 22/23 season this weekend. Traditionally the new season starts with the clash between the Champions versus the runner-up in Vienna. At 14:00 the Viennese runners-up will meet the double winners FSG Linz/Rum and at 17:00 Wiener FV will ask Villach to dance. Only last week, Villach won the Supercup at home for the third time in a row, against WFV.

KAC and IC Graz, IFL returnees, will also test their strengths on Saturday. The two teams are the designated semi-final opponents of the two “big” teams. But the remaining 4 teams have narrowed the gap. Dragons v Crossroads and Zell v Linz/Rum will start the championship on Sunday and will be looking to have a strong say in who gets the semi-final spots.

— This year we hope the IFL can be run without much postponement. There is a plan B, C and D, because we also have to look at our partners in Hungary and Slovenia, says sports director Timmi Taurer.

In the Women’s Bundesliga, unfortunately, the Bandits’ lights went out and the KAC took over the Carinthian women’s team. Zell and Innsbruck, like Linz and Rum, will be playing together this year. The two Viennese teams complete the league.

— We have seven women’s sites in the Bundesliga. I would like the clubs to focus more on attracting young players so that they don’t falter in the medium term. This is also a very challenging task for the association, adds ÖFBV General Secretary Gerold Rachlinger. 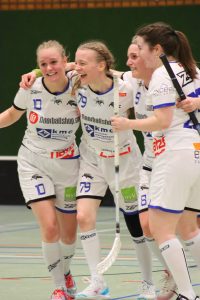