It was very important first step to early educate the key persons and project owners who are in charge of this project at the beginning of the floorball season. In this way the stakeholders from the different Special Olympics sections will be able to open up the “floorball groups” within their clubs and schools – just after the long summer vacation and at the start of their activities.

The seminar was conducted by Juan Antonio Roldan, Miguel Prieto and Carlos Lopez who gave a short theoretical session in the morning. The main focus was invested into the six hours of practice. The group was completely formed by staff from Special Olympics Aragón. The course was good fun and very helpful to get them prepared to start playing floorball with their athletes. All the staff were eager to go back to their organisations and groups and transfer all their new knowledge and skills into practice.

Furthermore, Special Olympics Spain and Floorball Spain agreed to go a step forward in this collaboration and sign a memorandum. It was stated that this kind of seminars and courses shall be continued and extended. To educate Special Olympics in floorball was only the start. Both organisations are keen and interested to strengthen the cooperation and to work on the growth of floorball, use joint strength to organize competitions and further common activities of mutual interest. There is plenty of work and ideas over the next week – where both parties can show to the communities how important floorball is for Special Olympics and how important Special Olympics athletes and organization is for Floorball Spain. 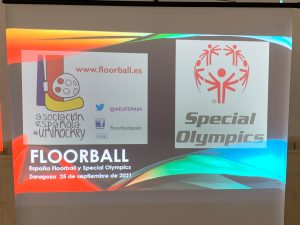