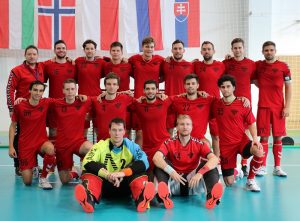 Before the finals, the day began with the match for 5th place in the men’s tournament. It was between two teams who are very familiar with each other. SZPK Komarom and Phoenix Fireball have been amongst the top teams in the men’s league in Hungary for many seasons, winning many titles between them. For Phoenix it was #20 Domokos Racz with a hat-trick and #37 Tamas Resi with a double that did the damage, but in a game with fifteen goals, the other 10 were all scored by different players. The match was closely contested the whole way, with only one goal separating the teams for most of the match and the lead changing between them. The last period began perfectly for Phoenix with a penalty shot converted by Racz. The positive energy this gave to them was immense. A goal to equalise a few minutes later and then another at the 45 minute mark by #27 Szilard Harangozo put them in front. It was Komarom’s turn to chase but they could never get back equal and Phoenix defended their status as national champion and took 5th place. 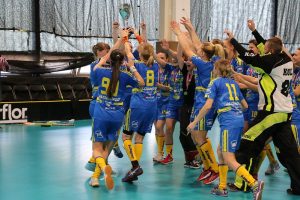 First final of the day was the Women’s final, played between Nauka-SAFU (RUS) and Kysucke Nove Mesto (SVK). In the first ever match between these two teams, Nauka were the favourites ahead of the encounter, especially considering they had already won two EuroFloorball Cup tournaments but Ksyucke had the home crowd on their side. In the first period the Russians had trouble with the smart defence of the Slovaks and instead found themselves behind after nine minutes, when #10 Klara Hlavkova struck for the first Slovak goal. Soon after, Nauka started to profit from their greater international experience and got on the board when their top scorer #11 Mariia Kitaeva netted for the first time. Kitaeva played an increasingly important role for Nauka and finished this match with 4+2. Nauka completely controlled the second period while Kysucke was only able to add one goal at the end of the period.  In the final period, Kysucke were doing a good job of holding the Russians out but their resolve was broken when Russia scored two short-handed goals in the final three minutes.  #99 Anastasiia Bulbash added another one with 30 seconds to go ensure Nauka’s third EFC title. Best players were #8 Vera Pelevina (Nauka) and Hlavkova (Kysucke). 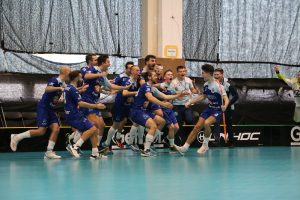 After a strong tournament so far, Greåker IBK was playing  the final against the team from Bratislava Tsunami Záhorská Bystrica. The Slovak side did not let any nerves get the better of them, and the whole first period the two sides were not able to get on the scoreboard. Both teams were determined to make a good start to the second period which was another tight affair full of end to end actions with a lot of physical contact and top class saves from both goalkeepers. #90 Mikael Helgesen got his team moving forward and was the first one to score for Greåker IBK. Their advantage lasted for only 10 minutes when  #81 Jakub Horecky scored in power play for Tsunami and the result was even again. Third period didn’t disappoint as well with 2 goals shared  in an enthralling performance from both sides. First, #97 David Leskovsky for Tsunami and 25 seconds later #67 Martin Isnes Kvisvik for Greåker IBK. The game went to extra time and, again, both goalkeepers made crucial saves that kept the match alive. Neither let anything past them and to penalty shots it went. There were saves and goals for both teams in the penalty shoot-out and it came down to the last of the five shooters. Tsunami’s keeper Martin Vilem saved the last penalty from Greåker so it was left to Marco Machovic to seal the win for Tsunami. It looked like he had gone too close to Greåker keeper, Markus Jelsnes, but he timed his move perfectly. As Jelsnes lunged for the ball, he spun and slotted the ball into the net. Tsunami are EuroFloorball Cup champions for the first time. Best player awards deservedly went to both goalkeepers.