FBC Predator Sabinov and AS Trenčín are the Slovakian Champions 2019

Predator Sabinov won the final series 3-0 against ŠK 98 Pruské, which had won the championships last three years in a row. Both teams played the final series in last year against each other too.

Most valuable players from Sabinov were definitely goalkeeper Radka Mládenková and skilled players like Martina Stašová, Lenka Cupráková and Klaudia Robová, who play for the Slovakian national team too. Sabinov started the series as the guest team and in the first two matches in Dubnica won 9-4 and 5-3. Third match was played in Sabinov. Home team took their chance of first match ball, and won 7-3. This was the first women’s championship gold for FBC Predator Sabinov.

– We wanted to win in our first match ball and we did, so we are satisfied. It wasn’t easy of course, in the first period Pruské played very well. Honestly, before this final series I had expected more balanced games against Pruské, but also we had known, if we won our semi-final series against Kysucké Nové Mesto, we are really close to win the championship. The winning is a result of our 12 years work with our youth, said the head coach of FBC Predátor Sabinov, Ján Motešický, after the deciding third match.

-I have to say, that Sabinov was better team in final series and deserves to win. I  want to thank my girls because they didn‘t give up and were fighting till the end. Even though that we had won the championship for four times, it isn’t obvious for us. 2nd place is also success and we are satisfied with it, Vladimir Gábor the head coach of the ŠK 98 Pruské comments. 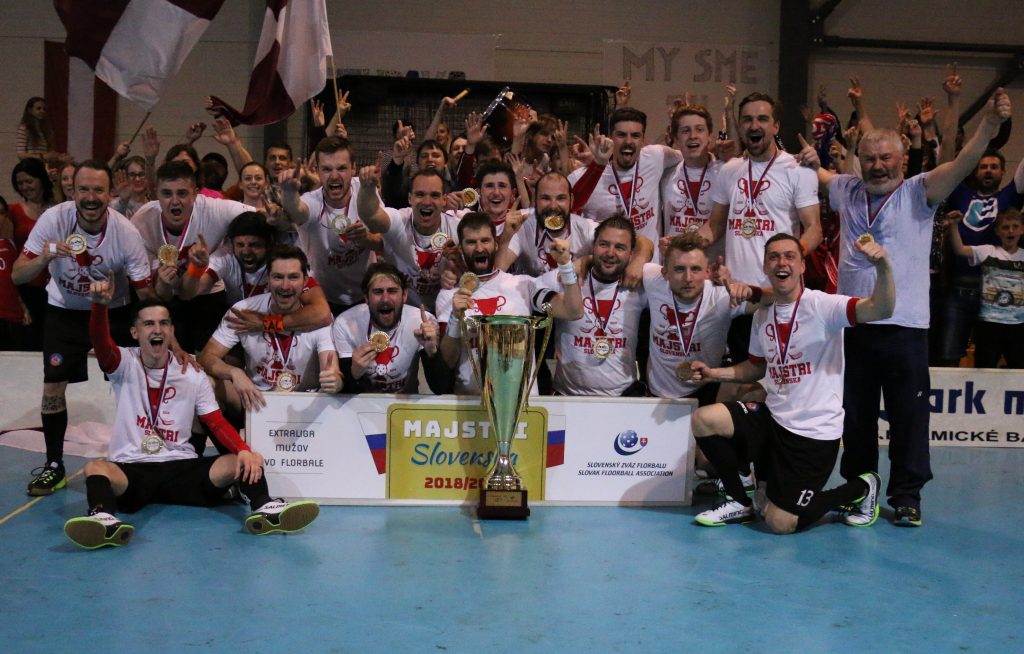 Men’s highest floorball league in Slovakia was won by AS Trenčín the team placed 8th after the regular season. AS Trenčín won the final series 3-2 for games against Tsunami Záhorská Bystrica, who were the champions for last two seasons.

Series was really balanced because four out of five matches ended with only one goal difference and with the same game result 5-4. After the first two matches, which were played in Stupava (Tsunami Záhorská Bystrica – Home Team) the result of series was 1-1. Trenčín got their match ball after overtime goal in the first home match. Tsunami did better and won 6-2 in the second game in Trenčín. There was a strong support for the champions, says the legendary goalkeeper, Tomáš Kafka:

-Few years ago, I promised to help guys from Trenčín during their play-off battles. A captain Juraj Matejka asked me and we made a deal. But I didn’t expect, boys would be so motivated and it helps them so much.“

-I think we were better team in final series. It’s a pity, that our competition doesn’t play only for overtime (like NHL), because every penalties are lottery. In fifth match, Trenčín wanted a penalties during the overtime because they were aware of their power in net. We didn’t score in penalties, so we couldn’t win a championship.“ says Martin Kubovič, the player of Tsunami Záhoská Bystrica and Slovak national team.

-Before play-off we got stronger. Tomáš Kafka was definitely one of main characters in the team. We started to win after his arrival and it helped everyone of us. I think, we didn’t want to go to penalties in fifth match, we wanted to score. However, we knew,  we don‘t have to be afraid because of our experienced goalkeeper, says Juraj Matejka, the captain and coach of the team Trenčín.

Third place went to the winner of regular season – TJ A FbO Nižná.