The women’s group will finish tomorrow and it looks very good for El Valle due to the fact that they have so far won all the three games they’ve played, but Leganes still stands a chance.

Yesterday we had slightly worn out Panam in the rink, but this morning the team was totally different and was clearly able to challenge Leganes for real. It 33 minutes before the first goal was scored in the game and the scorer was Leganes. Only 12 seconds later Panam scored the equalizer and at that stage either of the teams could have scored.

The game at that time was more or less quite fast coast to coast Floorball.
Leganes was the team which scored the second and less than two minutes before the end of the game their third. Panam managed to score the second 30 seconds later, but the remaining one minute was not enough for Panam, even though there were few very close calls. Leganes won 3-2 and can now start to rest for tomorrow, when Panam needs to get prepared for their game against El Valle tonight.

It seems that almost all the games so far have followed the same pattern. First half of the game is very equal and then the other teams starts to score and the other one can’t answer to the increased speed. This was the very case in this game as well. Paris put up a good fight half of the game, but then Sharks took the initiative and won 6-1 against Paris.

Not the best performance from Escorial if comparing to the match yesterday evening despite the fact that Escorial took 2-0 lead quite easily in the early stage of the game. It took almost 30 minutes more to play before Utrecht was able to equalize the game.

Hard match for both teams and Escorial shot more, but in order to score, the shots should go towards the goal, which this time was not the case though. A 3-3 draw created interesting set up for tomorrow´s games. Escorial is leading the group with same points and with same goal difference as London Sharks, but Escorial has scored more goal.

Milano lost yesterday against Phoenix and today’s match was the first one for El Valle men’s team in this tournament. Both teams went for full speed from the first second of the game on and they were scoring by turns until the half way of the period, when El Valle took the control and was able to take 7-3 lead by the end of the first period. Scoring by turns continued in the second period, 16 goals scored during 40 minutes time and the teams started the second intermission with 10-6 lead for El Valle. 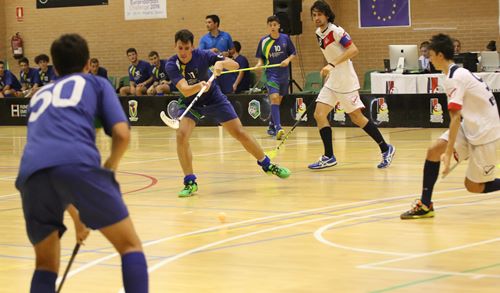 By winning the match 13-7 means that El Valle is leading the group A and a draw tomorrow against Phoenix is enough for them to secure the victory in the group.

Panam United has lost both of their games and they should win against El Valle with more than ten goals to maintain chances to play for the victory. Unfortunately for Panam the victory over El Valle was not even possible tonight. A tough game in the morning against Leganes was still visible in their movements during this game and 12-0 victory for El Valle meant that Panam is not playing for the victory of the Women´s EuroFloorball Challenge tomorrow.

All the results, standings and personal statistics can be checked from the EFCh2018 event page

Men's national championships are back and running in Slovenia