The day began unusually early for Singapore and Japan men’s teams – and they both fought hard for a first victory in the tournament. The beginning was very even – no goal was scored for the entire first period. It was Japan who scored first, but the Singapore managed to tie and take the lead soon afterwards. With the score 3-1 for Singapore in the 46th minute, Japan still fought hard, but could not stop their opponent´s offensive game, who eventually won 6:1 and the chance to play against Poland for the 5th place. 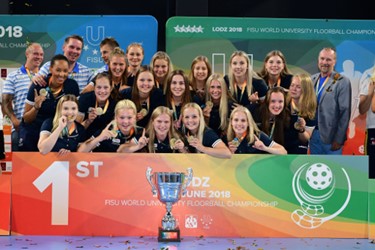 While the men’s game for 5th place was being played, the women were already fighting for the bronze medal. Although the Polish fought hard to stand on the podium at home, Sweden’s superiority was clear. They led and controlled the game, leaving the Polish waiting for a counter chance. The host team did not, however, manage to use any scoring opportunityand lost 14 – 0, making Sweden the first medalist of the day.

Somewhat reversed, game for women’s 5th place followed. In their last game of the tournament, Singapore and Japan presented themselves very well. Both teams showed their best and constantly created scoring opportunities. They remained tied throughout most of the match, but Singapore managed to take the lead in the third period, winning the game 5 – 2.

The next meeting that would decide the fate of men’s bronze, Finland clearly dominated over Slovakia. They took the lead quickly, scoring twice at the very beginning and although Slovakian team  managed to counter and score,  that would be the only goal they lose in the whole meeting. As the game progressed, it was the Finnish who created scoring opportunities and did not allow the opponent to play freely.  The game was concluded 11 – 1, giving Finland 3rd place on men’s podium.

The next match was the last opportunity to see a host team at the tournament – the match for men’s 5th place between Poland and Singapore. The latter, having  finished their last match no more than 4 hours earlier, started the game enthusiastically, but very soon their tiredness became evident. The first period was concluded with a score of 2 – 0 for Poland. As the game progressed, it was the Poles who set the tempo and it was not until a 7-goal disadvantage that Singapore managed to score their first goal. Despite scoring twice more in the last period, they had to give the 5th place to Poland, after an 8 – 3 finish. 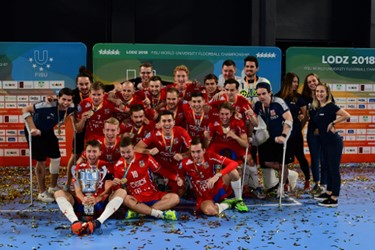 That left only two matches to be played: the finals. Women were the first to go and did not disappoint: after an opening goal from Finland, both teams made numerous attempts on each other’s goals and played the ball wisely around the whole rink. At the end of the third period, with Finland still leading, the Czech decided to play without their goalkeeper. However, this strategy led to losing two more goals, and the endgame result 6 -2 for Finland. Thus, the Finnish defended their title as World University Champions.

The last meeting of the championship, the men´s final, was a truly hard-fought battle between equal opponents, but it was the Czech who managed to keep the lead throughout most of the game. The Swiss did all they could, including saving a penalty, but did not manage to overcome their opponent. In the final phase of the match, the Swiss played without the goalkeeper, but, just as in women’s final, the decision cost them another goal. As a result, the Czech took the championship took home with a score 5-3. 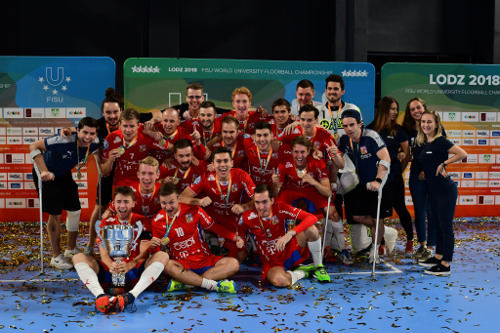 The Awarding Ceremony of 2018 WUC Floorball began directly after the final game. Before the decoration of the winners, Mr Przemysław Jagielski, the vice- chairman of the Organizing Committee, took the stage to thank all the volunteers for their hard work during the event, and present  awards to those most active. The OC also took the opportunity to single out the best players of the entire tournament, as follows:

After the individual decorations, teams were presented with medals and trophies by CISCA members and Professor Sławomir Wiak, OC chairman and the rector of the host univeristy.

The Closing Ceremony followed, where Mr Alim Maluf Neto, having pronounced the 2018 WUC Floorball closed, handed over the flag of FISU from Professor Wiak to Bostjan Lesnik – a representative of the OC of 2020 edition to be held in Koper, Slovenia.