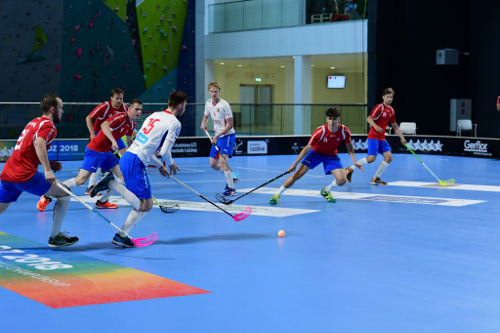 The day started with women’s quarter-finals: Poland vs Singapore and Sweden vs Japan. The first quarter- final ended with the victory of the host team. Singapore played wisely, but lacked the skill to capitalize on their actions. Having won 7-1, the Polish advanced to the semi- final against the Czech. Meanwhile, the first goal for Sweden was scored 7min into the game and by the end of the first period the Swedish, having built up a considerable lead, started saving their strength a little for the evening semi- final match with Finland. Nevertheless, they scored several more times, losing only one goal to the Japanese. Final score of the match: 18 -1 for Sweden.

What followed was a truly fascinating men’s first semi – final, where the Group A winner – Swiss team – faced Group B runner-up – Finland. The teams started scoring right from the start: the Swiss got the lead but Finland turned the score around in 2 minutes, only to be tied again by the Swiss men led by the impressively playing Manuel Engel. The teams remained tied for a while, but it was Switzerland who were more accurate with shots, despite a missed penalty. They built a stable advantage of 5-3, which didn´t change until the very end of the match, when the Swiss scored to an empty goal from a counter attack making the final score 6:3.

The fight between Switzerland and Finland somewhat overshadowed the match for 5th place played at the same time at Sports City Hall. With a strong start, team Poland scored 3 goals in the first period. However, after the intermission, the Japanese managed to balance the game and create good goal opportunities, though failing in accuracy. As the game progressed, the Poles took advantage of Japanese team’s tiredness, managing to increase the lead to 7-0. The game ended quite spectacularly, with an honorary goal from the Japanese with just 10 seconds left, followed by another point for the Polish literally in the last second of the game. Final score: 8 – 1.

The awaited second men’s semi-final brought a definite victory for Czech Republic. The Czech team came into the match strong, very quickly scoring 3 goals in the first period. Slovakia fought hard but scored only once in the power play. Even the injuries of 2 Czech valuable players didn´t stop them from winning 8:1. Thus, the fate of gold will be decided between Switzerland and Czech Republic. Finland, last WUC champion, will fight Slovakia for bronze.

The evening round was decisive for women. In the first semi – final, the better- rested Finnish team surprised the Swedish with a striking start – it took them no more than 31 seconds to take the lead. The Finnish continued to increase the advantage to a confident 4 – 0 by the end of the first period. The intermission seemed to help the Swedish – they came back strong, managing to score 3 goals. In the last minutes of the meeting, they did everything they could to tie the score, playing without the goalkeeper, but the decision backfired when the Finnish scored once more to an empty goal, concluding the match 5:3.

The other semi – final was, unfortunately, not as balanced – in a meeting between Czech Republic and Poland, the Czech had the upper hand throughout the whole game. Despite Poland’s best efforts, the game ended 14 – 2. As a result, the teams vying for women’s championship title will be Finland and Czech Republic, and fighting for bronze – Sweden and Poland. 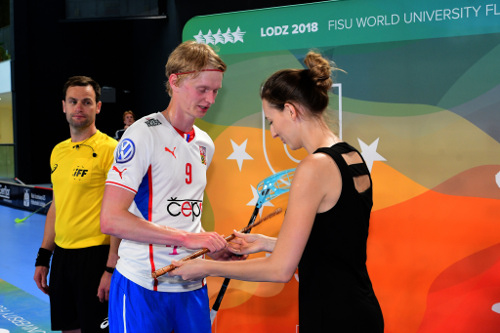 Reina Shinoda (JPN)
We lost again with a big difference but we tried our best and we´re proud. I´m very happy that we scored our first goal and it was me. But I don´t really mind because the team is what matters. Our next game is against Singapore, we definitely want to win this time.

Jakub Sujkowski (POL)
We sticked to what we were supposed to play and we took the opportunities when Japan did a few mistakes and that let us gain a nice result. The fact that we played at home gave us the calmness in playing the ball and we felt our fans support.

Vales Radek (CZE)
Despite the result the match was not easy for us. Slovakia played fast, strong in the corners and didn´t let us score easily. We want to win tomorrow and we are looking forward to a final