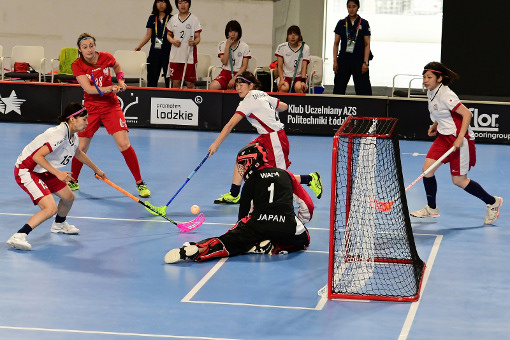 Women’s tournament kicked off with a meeting between Poland and Japan. The nerves of teams showed as in a somewhat chaotic match, both sides made several mistakes. Polish players had the ball most of the time, but often could not capitalize on it. Nevertheless, the first period was concluded with a score 3-0 for Poland. After the intermission, the host team improved in efficiency, scoring 5 more goals, including one in power play, losing none. The Japanese team showed their speed blocking many shots, but was not able to score despite several dangerous situations under the host’s goal. The match finished 10-0 for Poland.
In the meeting between Singapore and Sweden, rescheduled due to unfortunate luggage loss, Sweden started strong, scoring 3 goals in the first minutes of the meeting. Leading 5-0 after the first period, Swedish players clearly showed their supremacy, leaving Singapore struggling. As Sweden’s lead rose to 8-0, Singapore, quite impressively, managed to organize their defense and create some goal opportunities, although without success. Sweden scored two more times in the last part of the game, finishing 10 – 0.

Men’s tournament started out with a match between Slovakia and Singapore. The better-organized Slovak team defeated the defending Singaporean side. Despite Singapore goalkeeper’s great effort, Slovakia took the lead, scoring twice in the last 3 minutes of the first period. Later on, both teams had good opportunities, but it was Slovakia again to score twice. At the very end of  the meeting, Singapore’s Lim scored an honorary goal with an impressive long shot, concluding the game 4-1 for Slovakia.

The tournament took a quite surprising turn in the match between Czech Republic and Finland. In a fierce and aggressive game, it was the Czech to score first, but it took Finland less than 2 minutes to tie the game. However, the Czech took the lead again after a mistake in the Finnish defence at the end of the first period and did not let go of it for the rest of the match, building up an advantage of 5-1. In the final exciting minutes the Finns fought well, at a certain point playing without goalkeeper and entirely in the opponent´s field, and managed to score 6 minutes before the end. In return, the Czech scored again, beating 2016 WUC champions 6-2.

The final match of the day was played between Poland and Switzerland. The Poles started very well, quickly gaining a 2 point lead, finishing the first period with a good score 2:1. The rest of the match was equally dynamic, but the Polish team has weakened, allowing the Swiss to score 4 goals within several minutes. Aggressive play and better stamina led to a 7-2 victory for the Swiss.

Manuel Engel (SUI)
At the beginning we were a little bit nervous. Many of our players had their first match today. Polish team did a good job, they had a lot of energy and came out with all they had. That was impressive but we came back quite strong and there was a lot of improvement in our game. We started to play simply and add a quality in the things we do. Tomorrow’s match is going to be tough and we hope that we will find our game a little bit faster.

Krzysztof Burda (POL)
I think we can be proud because we knew that Switzerland is a good team. We did well in a defence in spite of the fact that they were faster than us and they played more precisely. In the second period we lost some goals too fast. If we did not let this happen we would be still winning the game. Tomorrow we are ready to fight against Slovakia and win.