Familiar faces in the 2018 Swiss Superfinal

Piranha chur and UHC Dietlikon are regulars in the Swiss Women’s Superfinal and Men’s multiple champions SV Wiler-Ersigen are not a surprise either. They will face Floorball Köniz in the Swiss Superfinal that will be played on Sunday 22nd of April.

Reigning champions SV Wiler-Ersigen defeated HC Rychenberg Winterthur four times in a row and once again made their way to the Superfinal. Floorball Köniz joined them only a day later as they got their fourth victory against GC Zurich.

SV Wiler-Ersigen are known for their dynasty in Switzerland. It’s more of a rule than an exception that they are among the two finalists. Within the last 11 seasons, Wiler-Ersigen have won the title 9 times.
One exception was in season 2015-2016 when Floorball Köniz and GC Zurich battled for the title. Köniz lost the final by two goals and have never won the brightest medal. Could this be their chance?

The Men’s Superfinal will be played at Swiss Arena Kloten 22nd of April at 15:30 local time. 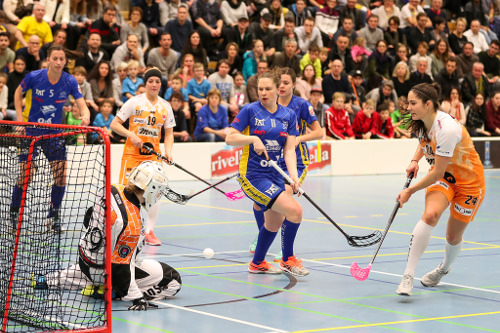 UHC Dietlikon were the first to secure their spot in the final by winning against Wizards Bern Burgdorf three times in a row. Piranha chur defeated R.A. Rychenberg Winterthur three times within four matches and also made their way to the final.

This will be the fifth time in a row that UHC Dietlikon and Piranha chur are the Women’s finalists in Switzerland. UHC Dietlikon are the reigning champions but the three titles before that were won by Piranha chur. Both teams have won the title six times.

The Women‘s Superfinal will be played at Swiss Arena Kloten 22nd of April at 12:00 local time.