Latvian Kekava and Spanish CDE El Valle were playing for the fifth place in the EFC morning match. The match was rather even from the start, but both teams had trouble with the accuracy of the shots. In the end it was Kekava who were more efficient and won the match 3-2 and took the fifth place. 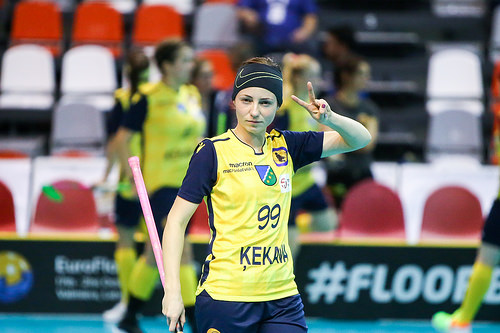 Both teams started the match rather calmly. Especially Kekava as they once again used their defensive tactic. However, their counterattacks were mostly intercepted by the fast Valle players. With 11 minutes played, Kekava got a chance at a powerplay. They were unable to score as their shots either went past the goal or were blocked by Valle. With only few second left, Kekava’s #99 Gundega Vancāne blocks a shot at their own end, run the ball to the offensive zone and took her team to 1-0 lead.

At the very start of the second period, Valle evens the score to 1-1. Six minutes later, Kekava is rewarded a powerplay which proved to be efficient. #74 Laura Skujevska sneaked to the back post and puts a rebound in. Once again, Kekava were in a one-goal lead. With few minutes left of the period, Valle also got a chance at a powerplay, but weren’t as successful.

Kekava got a chance at a powerplay once again in the third period. But Valle played rather well and were even able to hold the ball from time to time. Halfway through the period, Kekava’s goalkeeper #96 Kristīne Kirilova a beautiful pass to #94 Agnese Broliša who passed the ball to team captain #35 Elīza Elizabete Bērziņa and Kekava were in a 3-1 lead. Valle were pressuring Kekava and it seemed to be working as #18 Ester Sanchez Sanchez snatched the ball and decreased the score to 2-3 with five minutes left. Valle had several scoring chances at the end, but their shots went to the wall and it didn’t help that Kekava’s goalkeeper was playing really well and taking crucial saves. Kekava won the match 3-2 and took fifth place. 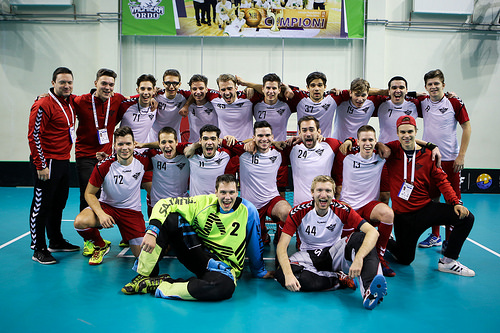 Russian Nizhegorodets and the Hungarian EFCh 2016 winner Phoenix were playing for the fifth place of the EFC. The match included lots of speed and dangerous scoring situations. The teams were playing physical play in the one on ones and trying to take advantage of each other’s mistakes. Both teams had an even amount of powerplays, but Phoenix took advantage of them better. It was a powerplay goal in the third period, that gave Phoenix a 6-5 win and fifth place of the tournament.

Nizhegorodets didn’t waste any time, but already took the lead with 20 seconds played. Not long after they had extended their lead to 2-0 as #22 Kirill Karkchalev shot a beautiful sweeper shot to the top left corner. The Russian team didn’t get much time to celebrate as Phoenix decreased the score and halfway through the period the score was already 2-2. The Hungarian team got a chance to take the lead via powerplay, but their play was predictable and Nizhegorodets got a few dangerous scoring chances. In the end, the powerplay was successful and Phoenix were in a 3-2 lead. However, when Nizhegorodets’s #11 Alexandr Latukhin snatched the ball, Phoenix defence simply watched as he run to the zone and evened the score.

Lot of speed and dangerous scoring situations were seen during the second period. Phoenix got a powerplay, but only 30 seconds later so did Nizhegorodets and the match was continued 4 vs 4. This suited Nizhegorodets and they took advantage of Phoenix’s mistake and took the lead. But before the period was over, the score was even once again.

The match went back and forth also in the eventful third period. First Phoenix took the lead but five minutes later Nizhegorodets evens the score. At 51:14 Phoenix’s #7 Janos Muller scored his third goal of the match and takes his team to 6-5 lead. Nizhegorodets took a time out with only few minutes left of the match. Even though they had the ball, they decided to keep playing with goalkeeper. It seemed as the whole team was a bit confused of the plan for the last minutes and were in a rush which led to mistakes. Phoenix won the match 6-5 and took fifth place of the EFC.