Bring AOFC to TWG and win a rink for your country!

The IFF together with the AOFC have created a social media campaign in connection to The World Games 2017 in Wroclaw. 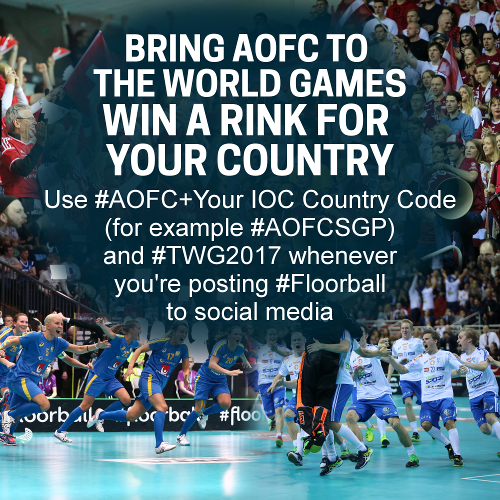 The Asia-Oceania Floorball Confederation (AOFC) in cooperation with the International Floorball Federation (IFF) have created a social media competition where the floorball Asian and Oceanian Floorball fans can show their support for the Floorball teams playing in The World Games. It is at the same time a competition between the countries, where the most active country can win a rink for their country. The main aim of the competition is to activate AOFC countries on social media when it comes to The World Games:
– We want to show The World Games and to the IOC how active and passionate our supporters are and what they can bring to the Olympics from both an exposure and marketing perspective. We want to have the highest social media users in relation to The World Games, says John Liljelund the IFF Secretary General.

The first prize is a floorball rink, but that’s not all. The second prize is two full goalkeeper kits and the third prize is two tool bags with sticks and balls.

The competition is based on a points structure that measures the numbers of social media interactions in the different IFF SoMe Channels. The floorball fans, whenever posting to social media have to have the hashtags #Floorball and #TWG2017 in order to participate. But also in order to separate from which country the participant is from, they need to have a country specific hashtag #AOFC+Your IOC Country code, for example for Singapore the hashtags would be #Floorball, #TWG2017 and #AOFCSGP. The IFF Mobile App users (via Guess the score) will also be counted. The IFF Mobile App will be updated prior to The World Games. The matches will be shown on the IFF Youtube Channel. The viewers of the matches will also be counted. In case the competition is even, the IFF will take into consideration the amount of followers and subscribers. The competition starts 20th of July and ends 7th of August.

*Only public actions can be counted

The IFF and the AOFC hold the rights to any changes and are not responsible for possible technical problems that hinder participation nor for possible problems caused by taking part in the competition.