The IFF Athletes´ Commission (ATC) held their annual meeting in Växjö, Sweden on 6th & 7th May, during the Men´s U19 WFC. This was the first meeting of the new commission group who were elected during the Men´s WFC 2016 and Women´s WFC qualifications 2017. 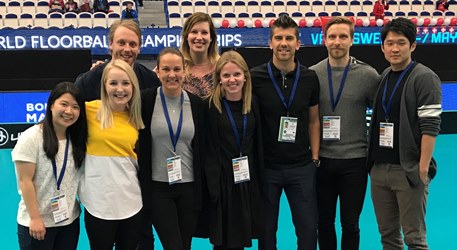 The ATC´s main role is to act as the representative of all floorball players and be their voice in presenting matters of concern to the IFF Central Board, IFF committees, and IFF office. The two day meeting covered a wide-range of topics including the importance of the upcoming The World Games, the role of the ATC, and how the ATC will work over the next 3 to 4 year period.

Both Mr John Liljelund, IFF Secretary General, and Mr Martin Klabere, IFF Central Board Member and Chair of the IFF Rules & Competition Committee, addressed the meeting and provided some valuable insight to the ATC members.

The topics that raised the most discussion were those involving competition matters, which are of course of great interest, and the most relevant, to all the ATC members. These topics included the current WFC qualifications system, the future of the Champions Cup, compression wear colours, how to try to reduce participation costs at IFF events for smaller associations, and some of the modified playing systems that have been proposed by National Associations for 2017/18.

The use of video technology in Floorball was a hot topic as well as an update on the proposed rule changes that will come into effect from July 2018. The discussions on these topics resulted in several proposals from the ATC that will be considered by the Rules & Competition Committee.

The ATC members are encouraged by the IFF Central Board to participate in many of the IFF committees, and representatives of the ATC will be included to the Rules & Competition Committee, Referee Committee, Rules Group, Medical Committee, Entourage Committee and Equality Commission.

Previously, the ATC has operated on only a 2 year term which has made it difficult for the commission to be as effective as they would like. It is hoped that with the new changes to the term system which now extends it to be for 4 years will have a positive effect, and all the ATC members are determined to work hard to raise the profile of the ATC and be sure to be a strong voice for all floorball athletes.

The current ATC is:

The objective of the Athletes´ Commission is to utilise the Floorball players´ experience and knowledge when developing the game of Floorball and the IFF Regulations. The IFF Athletes Commission participate in the preparation of the Game Rule changes, looking over the Competition Regulations, in the development of IFF Competitions, and in the promotion of IFF´s Anti-Doping policy.

The IFF Athletes´ Commission was established in November 2007 by the IFF Central Board. It consists of 4 female and 4 male athlete representatives. The first commission members were appointed based on nominations by the Member Associations, however, since 2009 the election of the Athletes was conducted during the Adult‘s World Floorball Championships. From 2017 onwards the elections are now held during the WFC qualifications to ensure that as many players as possible have the opportunity to vote.

To contact the Athletes´ Commission directly, email to: athletescommission@floorball.org