Floorball for refugees in Switzerland

Sport without Borders (Sport ohne Grenzen) is an integration programme for refugees in Rüti, Switzerland. Their main target is to bring people together with sports, including floorball. 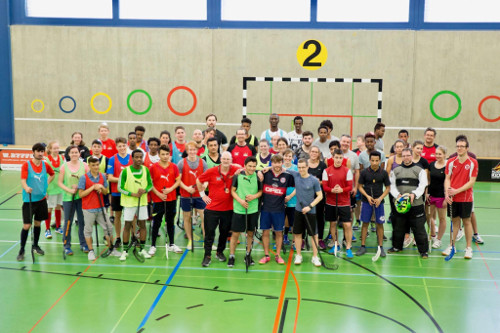 About a year ago Rafi and Alex met with the representatives of the municipality, the churches, the asylum organisation and the different local associations. Their aim was to find out what kind of offers were already in place for the refugees and how they could help:
– We all know about the situation of the refugees in our world, but what can we do about it in our village? We can’t solve the whole problem but we can do something here. That’s why Rafi and I decided on a project, says Alex one of the founders of Sport without Borders.
– We decided to concentrate on a sports project, because sport connects people beyond language and cultural barriers. Then we founded the project “Sport without Borders”. The aim of our project was to build a platform, where the community members and the asylum seeker can easily meet. In the beginning we played soccer on a meadow, where we met with some refugees and simply practised some sports. When it got colder we organised a sport’s hall, says Rafi.

Both Rafi and Alex run the project as voluntary work. The practice session might consist of several sports, but they want to involve the local clubs more:
– One of our aims is to convince the local associations to invite the asylum seekers to their clubs. A good example are the Floorball Riders.

Together with the Floorball Riders, Sport without Borders organised a floorball session where the refugees played the sport together with the locals.
– This was my first time playing floorball. It was truly great, says Mohammed a refugee from Africa.
The sessions are organised approximately twice a month, but Alex and Rafi are thinking about increasing the number of sessions. There are more and more people taking part in the integration programme. At first there were 20 and now the number is 50:
– It is amazing. Our wish for the future is that more people in our village get to know the refugees. We want to change the atmosphere on the streets, so that we become more of a community and the refugees will be a part of it, says Alex. 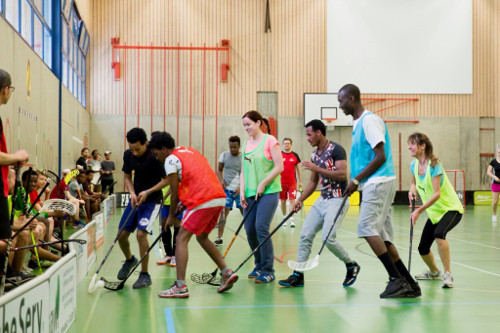